Up Close with Close Talker 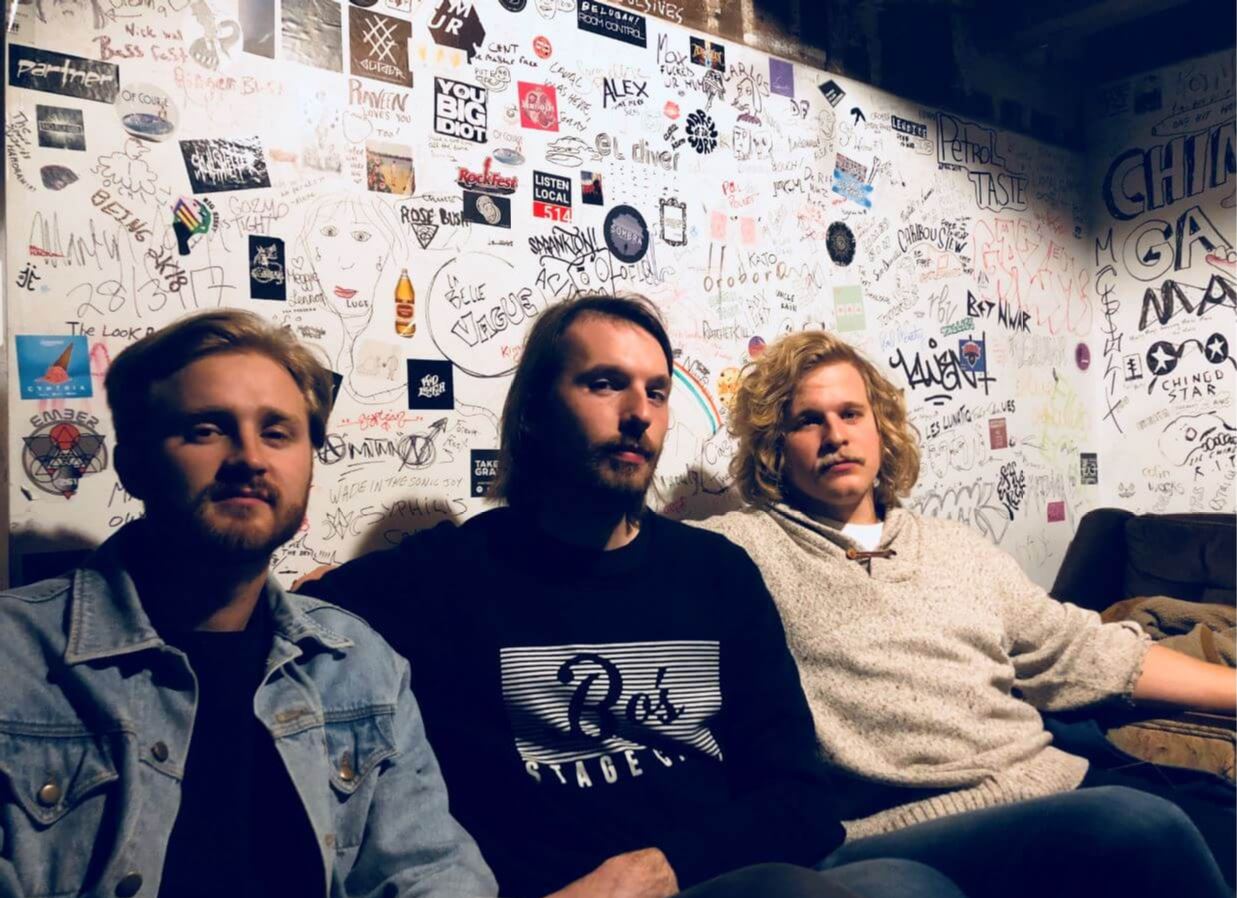 Close Talker rolled into Montreal on a brisk prairie chinook; the Saskatoon-based indie rock band was playing Casa del Popolo for the M pour Montréal festival this past week. We (the editors of Banter) kidnapped the band at the venue and took them to a secret underground bunker for an interview. In the video, however, they appear to be willing hostages; I assure you this was the case. No indie rockers were harmed during the production of this piece. Their latest album was released just this past year, so we talked about that among other things. Without further ado, here are Will Quiring, Matt Kopperud, and Chris Morien.

Banter: How long has the band known each other?

Will: Yeah, 15 years. We met in grade 9, high schools days. Chris and I would jam at lunch hour because it was so cold outside. And then I met Matt in 7th grade. His brother and my sister were trying to have a thing at the time.

Matt: My brother had a crush on his sister and they were like, “oh our little brothers should be friends, they both play guitar.” So, it was solely based on that coincidence that we were destined to be friends. But, as the story goes, I didn’t like Will out of the gate because he threw a football weird. And, you gotta understand, for 7th grade he threw really sidearm, it just looked off, and I was like, “I can’t be friends with this guy.” But, then we jammed and the rest was history.

Will: It was more Phil Rivers than Peyton Manning.

Banter: But his musical ability made up for that?

Matt: Yeah, then we were back to par and now we’re just vibing it out. And then Chris and I have known each other for over 20 years so that’s fun too. We’d ride our bikes up the hill together to school.

Banter: How important do you guys think it is for band members to have a close personal relationship outside of their lives as musicians?

Chris: I’d say it’s one of the most important things for sustainability. Especially as a touring band you spend so much time in close quarters, traveling, and the show is the smallest part of touring in terms of time spent together. I think that’s the number one thing I’d attribute to our being able to stay a band as long as we’ve stayed together as a band.

Matt: Yeah, the hour on stage is one hour out of eighteen awake, so it’s pretty important that we get along.

Banter: As a group with roots in a smaller city, do you think the importance of touring has had a bigger impact on the development of the group?

Will: Definitely, we’re from a city of 250,000 people, so starting as an indie band, it’s already such a small market. So, if you overplay, you’re just basically playing to the same people in Saskatoon. That really stretched us and made us tour. We started touring right since we started the band, steadily since 2014, just because of necessity. Being from Saskatoon you need to go out.

Chris: I think also getting exposed to other artists is important as well. We have always had a really good music scene at home, but it’s so much more to go to new places and see what other artists are doing and in the bigger centres you get so many different types of bands and you get to see what other people are doing. It’s definitely one of the perks of touring.

Banter: You guys have amassed quite the European audience, specifically in Germany. Why do you think you’re so appealing to listeners in that market?

Matt: Germany is kind of unique, and I’ll throw the Netherlands in there as well. There’s a lot more of an appreciation for music, more of a listening crowd, whereas in Canada sometimes I’ve felt as though the common denominator was more of a social thing, in Europe it’s a lot more personal and independent.

So, our music naturally caters to that, it’s a little more introspective, or reflective, so it’s more of listening audience as opposed to, “hey meet me at the Close Talker show that’s the place to be.” It’s more, “I’ll buy my advance tickets, I’ll get a beer, and I’m gonna listen intently.”

So it’s a bit of a different environment we’ve found, and I think for our sound, as we’ve evolved, as our sound matured—whatever that means—we’ve gravitated toward Europe and likewise. Not a slight to Canada, we love playing Canada, but it’s just objectively different.

Banter: What's the one thing you miss about the prairies when you’re out east?

Chris: Probably number one is just being at home, being with family and friends, it’s something that’s always on our mind when we’re touring. That’s probably the main thing, but that’s no fun, what else?

Will: I think also, coming into a city like Montreal or Toronto, you’re competing with a whole bunch of different acts and the vibe can be a bit more clique-y. In terms of everyone doing their own thing, you’re going to your own shows, and the night is more catered to your own lifestyle in bigger cities.

I feel like in places like Regina, Saskatoon, even Winnipeg or Edmonton, there’s kind of just one thing going on that night and you get people from all different walks of life and different friend groups coming to do that same thing.

"So, I do feel like the shows, for whatever reason, have been more meaningful when we play the prairies."

Matt: There’s a camaraderie I think at home, I’m not sure that it doesn’t exist elsewhere, but it’s just so evident at home, you can kind of sense it. Maybe we’re just more in tune with it in our hometown. And honestly we just miss our families. Our priorities have evolved as we’ve grown up, and that’s tough, but it’s way better sharing a bed with our wives than with a sloppy dude.

Banter: No offense, to sloppy dudes amongst us.

In one word, how would you describe your 2013 debut album, Timbers?

Banter: In one word, how would you describe your most recent album, How Do We Stay Here?

Matt: Confident, I have to elaborate: we’ve settled into a quiet confidence. We have so much more peace with this record. Not to sound arrogant, but we don’t particularly care what people think. We’re happy with it.

Chris: We’re still really excited about exploring new sounds and new ideas. That’s still at the very centre point of our songwriting. But, I think the way we approach it is more focus on, “this is the vibe we’re going for.” So we have a little bit more of a plan when we go into something. But, it doesn’t mean that we’re not exploring or getting excited about new ideas.

Banter: If you guys were forced to have one member of the band drop acid before the show, who do you think would be most able to keep it together on stage?

Matt: I am so confident that we would all do poorly.

Will: I think we would do very poorly.

Matt: We’re not like full music school, music nerd band, but we’re pretty calculated and we strive to play really tight. And, I’m pretty sure acid would hinder that.

Chris: One of the things we’ve tried to do is recreate the album as we recorded it. There are a lot of things going on and there’s very little brain power to look around or feel outside of our element. We’ve built such a muscle memory with performing that anything altering that…

Will: It wouldn’t be good.

Chris: We’re still working that out. We’re all still focused on this tour so right now it’s just playing these shows and getting the most out of it.