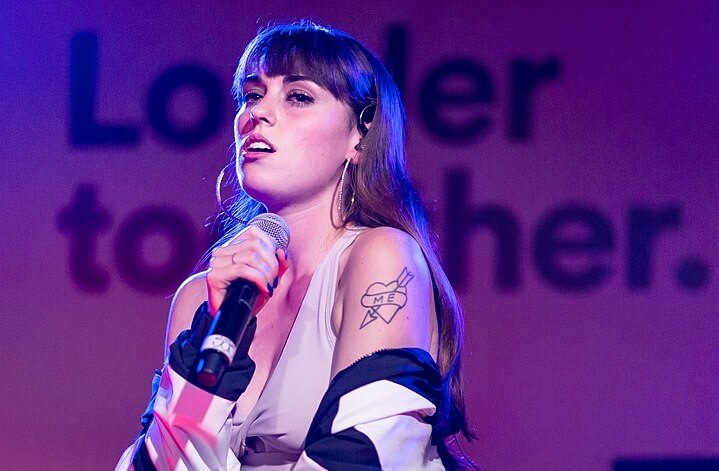 Over the last two years, Sasha Sloan released her first three EPs: Sad Girl (2018), Loser (2018), and Self Portrait (2019), all of which have been tremendously sad and tremendously successful.

People really like them. People also really like her, and the darling singer-songwriter has rapidly ascended to become the music world’s superlative supplier of sorry sentiment.

The projects feature absorbing melodies as well as vocals that are somehow both searing and soothing—listening to her will make you forget to wonder how that’s possible.

You’ll wish that there was some way to give the soundwaves a reassuring hug. I mean, they didn’t ask to be hugged, but you also didn’t ask to be thrust so forcefully and fathomlessly into your feelings. That’s just the way she goes.

We got a chance to sit down with Ms. Sloan for some banter before her Montreal show of the let’s get sad tour.

Sloan: I love Canada. It feels sort of like a cleaner America, and everyone is really nice; the chocolate is really good too.

Banter: Yeah, it is.

Sloan: The chocolate is fire.

Banter: A lot of Quebecers would say that your tour actually spans three countries. What’s the most alien thing about Quebec to you?

Banter: Yeah, I guess that’s a fairly noticeable one.

Sloan: I don’t think I’ve spent enough time here to pick up on any, and I haven’t really explored much. Downtown actually reminds me a lot of Boston, where I grew up, in a good way. I just love the vibe here. I haven’t noticed too many differences though. Mostly just the French.

Banter: Any American states you think that could be their own countries?

Sloan: Oh my god, all of them. California—they were trying to leave at some point. Florida. Mississippi. I mean, it’s so weird in the US because we all have state laws. So like, you can get super high in California, but then you can get arrested for it in Tennessee. And it’s all the same country.

Sloan: Very fragmented. The cultures are super different there.

Banter: A cliche music interviewer question is to ask which artists have inspired you or shaped your artistry or whatever.

Banter: But I want to know which artist you think is most diametrically opposed from you, either in terms of their overall sonic aesthetic, or just someone that you find categorically intolerable.

Banter: Okay, because you kind of took the bait there. So I guess if you do want to shout anyone out…

Banter: Well, I’m sure there are plenty of people who ardently disagree, but yeah. What’s the biggest difference between being a teenage songwriter and being a 20-something songwriter?

Sloan: I think experience—in life and in practice. When you’re 19, you don’t have as much to draw from as you do when you’re 24. But that’s also when I moved to L.A. to become a songwriter, and I had never cowritten before then. Once I got to L.A., I started cowriting, and that’s definitely something that makes you a better songwriter on your own. And then I went through a breakup, which gave me a greater perspective on life.

I had felt things by 21 that I hadn’t felt at 19. I really think the 10,000 hours thing is true. I hope I’m at, like, 1,000 right now. I really don’t know how many I’m at. I really think working with people who are better than you and just being humble is how you get better.

Banter: You spent a lot of time in Siberia when you were younger… Can you tell us anything crazy about Siberia?

Sloan: Well, I learned how to fillet fish there. In the winter, it’s -40 degrees fahrenheit, which I think is also, like -40 in celsius.

Sloan: Like, fucking cold. And then the summers are over 100 degrees. My grandparents live in this village where all the food is grown on local farms. I would watch my grandfather kill cows and then eat them for dinner. It’s just a very different lifestyle.

Sloan: I did, as a kid, but I haven’t been back in a while. It’s really far: like, a 12 hour plane ride and then, like, a seven-day train ride. You have to get on the Trans Siberian Railway, and then get dropped—

Banter: Fair. Okay, so there’s a bit of blaspheming on “Self Portrait”. Were you raised religiously?

Sloan: Not really. I grew up in the inner city where the public schools were so terrible that my parents sent me to a private school that was actually just a Catholic school, but my parents weren’t religious. So I would be surrounded by super religious people during the day, but when I went home, it would be the opposite. So, it was really interesting. I’ve always kinda been an atheist. I think that sort of fits well with my cynical view on life. I guess I’m more agnostic. I’ll still play with a Ouija board, you know what I mean?

Sloan: Yeah, I mean. I do like religion sometimes. One of my best friends is Jewish, and in a sense, I’m really jealous of the family values and the sense of community. When religion is great, it’s great. But when it’s bad, it’s so bad.

But yeah, I’m definitely not religious at all.

Banter: What’s the most bizarre thing you believe? You know how sometimes you meet people, and in every other regard they’re a super normal person, but then 15 minutes into the conversation it turns out that they’re a Holocaust denier or a flat Earther. Just something super crazy.

Sloan: Okay, yeah. I have one. I think Marilyn Monroe was murdered. I got really bored one summer, and I literally spent hours online. So, this is why I think she was murdered:

Sloan: So, the way she overdosed was through suppositories. She didn’t take pills up her ass, so when she “overdosed,” that’s how they were “given” to her. The Secret Service was already outside of her house when it happened. And then, in the 90s, an unidentified sextape went up for sale in an auction, and the government bought it.

I think she made a sextape with JFK, and she was going to leak it.

Banter: Ahhh… So they covered their tracks.

Sloan: They killed her.

Banter: Ahhh, okay, well I do not have the knowledge or resources at my disposal to comment on that right now.

Sloan: I could be completely wrong because I was sixteen and just losing my mind from boredom one summer, but I really convinced myself that that’s real.

Banter: Okay, well if anyone wants to go down the rabbit hole with this, they can check that out.

One of  the songs from the latest EP is called “Smiling When I Die.” Have you ever had any near death experiences?

Sloan: Yes. I was riding my bicycle in the city--I was a ten-year-old who had just learned how to ride a bicycle--and I lost control. I flew out into the middle of the street, and a car slammed on its brakes and almost hit me. I thought I was going to die. It was really scary. I’ll never forget it.

Banter: The world would have no Sasha Sloan right now.

Sloan: The world would have no Sasha Sloan. Who knows? People wouldn’t be here tonight. Maybe it would affect somebody else’s trajectory in life.

Banter: Yeah, you can kinda go all the way with the butterfly effect...

Making people cry is sort of your bread and butter… How do you fuck yourself up when you’re about to perform and you’re … just too happy? Is that ever an issue? Do you just try to think about the death of a childhood puppy… or?

Sloan: You know what’s funny? I feel like I get so fucking nervous that I’m already fucked up in the head. I don’t know. It depends. I sort of just feed off the energy of the crowd. So like, there are some shows where I’m honestly just bored--shows where the crowd is just like this *stares blankly at the wall with hands by side*. You know what I mean? And there are some shows where you just go ham to sad songs because everybody is screaming the lyrics back at you. Some people are smiling, some are sobbing. Everyone has a different reaction.

I don’t know I just naturally get emotional when I sing songs; they bring back feelings.