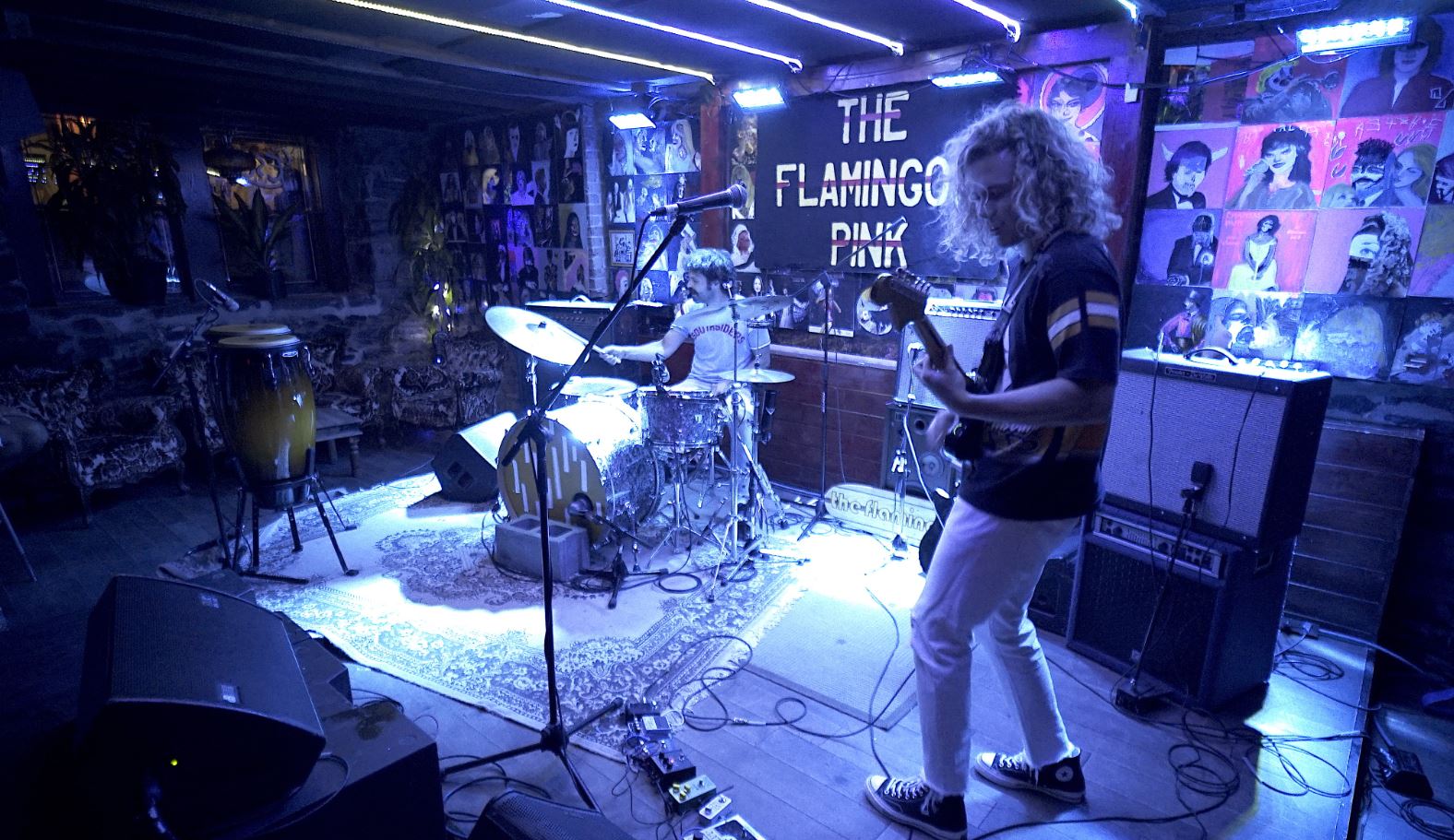 The Flamingos Pink—Julien Corrado (drums/vocals) and Sacha Gubany (guitar/lead vocals)—shake, they slap, and they rock steady... real steady. If you like what rock sounds like when rock sounds good, you’re probably already familiar with them.

If you aren’t, there’s no better way to acquaint yourself with Montreal’s surf-vibe garage-rock power duo than by reading their debut appearance in Banter Magazine.

As the Flamingo bros approach their appearance at Tour Taverne, they’re reflecting on a productive 2019 and chomping at the bit for what is sure to be a formidably gnarly 2020.

Banter: Neither of you strike me as the sort of guys who just started making music last year. What’s your musical background?

Corrado: I played drums. My father played drums. I’ve been in a bunch of different bands where I’ve played percussion as well. I grew up on disco and funk, and I’ve just always loved rock and roll in general. I went through a lot of different phases—Black Sabbath, Led Zeppelin, David Bowie, the Rolling Stones, the White Stripes. I’ve always loved music.

Gubany: I got started a little more recently, as a singer in another band from Montreal around four years ago. But as a kid, my dad would sing and play guitar, so I guess I sorta got it from him.

Listening to the Beatles on the home sound system was one of my first real experiences with music. I really got into that, and then just fell in love with rock and roll—kinda like Jules. When the two of us met, things just clicked, and it was clear that we had a lot of the same musical interests and the same raw emotional connection with similar genres.

Banter: On Kustom Kreme, the riffs and drum patterns are really forceful and really abrupt. It reminds me a lot of early-2000s garage rock, and I actually noticed that you guys have a lot of that stuff on your curated Spotify playlists—bands like the Hives, the White Stripes, the Libertines, the Strokes, etc. Who’s your absolute favourite artist from the post-punk revival scene?

Corrado:  *nods approvingly* The White Stripes, just because of how visceral and raw they are. What’s crazy with the White Stripes is that as you get more and more into the music, as you really start digging, you just keep finding more and more substance. And there’s just two of them, which is so crazy when you think about the amount of exploration they display. There’s blues, there’s rock, it’s soft, it’s hard, it’s upbeat, and playful and heavy and dark and emotional.

Corrado: Sacha is always showing me interviews with Jack White where he explains all this stuff, and it’s amazing how he’s able to make it all make sense.

Banter: What’s the chillest thing about playing in a rock band in Montreal?

Corrado: Just being able to make music full-time, so hopefully you like your bandmate ahah.

Gubany: Although there have been a lot of smaller venues in and around the city closing down lately, there is still a solid scene for local acts who are just getting started. That’s how we’ve been coming up, just playing a bunch of different small venues. As a city, it really is a place with a lot of potential for growth in front of live audiences.

Corrado: Yeah, I was actually just talking about this with my buddy Jonny. He doesn’t actually play in a band, but he’s really into a bunch of different genres of music as a consumer. Even though he isn’t making music, he was saying how cool it is that basically everyone who he’s friends with in Montreal plays an instrument and makes music with their hands.

In a city like Toronto, it seems like more people are focused on rapping or singing and producing, but in Montreal, there are a lot more people actually playing physical instruments like bass or guitar or the drums. It’s more hands-on in Montreal, which is chill.

Banter: Are there any challenges of being an Anglo duo?

Corrado: Yeah, I’d have to say, there is a bit of a disconnect for the language.

Gubany: Especially when you travel outside Montreal, it does feel like people and listeners see you a little bit different. Even when we go play and record out in the Eastern Townships, people are excited about the music itself. But it’s funny, because after the show when people come up to you, they address you in English or some form of broken-English… and you’re just standing there thinking, like, “But I’m francophone as well!”

I don’t know. I do find that it is difficult. Especially as musicians, like, when you’re riffing with the audience in between songs, I’m never really sure how to address people. It feels more natural to talk about music in English, but I don’t want to alienate people. I was born here. I grew up going to school in French, and so did Jules, so we definitely have that strong French background as well, you know?

Corrado: And we’re proud of it! I think, as well, we would like to explore connecting with peole outside of Quebec. So as we do that, we do want to be able to show and impress people that we are bilingual. If we play in France, they would expect from our music that we are anglophones, and then maybe they would be pleasantly surprised when they hear us speak perfect French. Going to places like the States, you can just impress them by speaking English. So I think the language thing is something that we can play off to our advantage as we grow and play more outside of Quebec. But, yeah, being from here and starting out as people who speak and perform in English can be difficult. The language issue in Quebec is not always easy to get a grip on.

Gubany: Yeah, it can be tough because you can’t always please everyone.

Corrado: I do feel fortunate that if anyone ever gets touchy about that sort of thing, I can put them back in their place in either language.

Banter: Have you ever been wasted while performing?

Banter: Okay. Would you rather cut off your own hand or personally strangle a kitten to death?

Flamingos, in unison: Strangle a kitten.

Corrado: Not saying I would enjoy strangling the kitten.

Corrado: I don’t want to harm any living creatures, but-

Gubany: -but if push comes to shove…

Banter: I mean, it would be really tough to play your instruments without hands.

Corrado: Duck tape, and then use your head.

Corrado: What about the drummer for Def Leppard?

Banter: True… I mean, strangling the kitten is just a shitty afternoon, but then you get to wake up the next day with both hands, ready to make some music.

Banter: “Fussy” is one of my favourite songs on the album. What’s something that makes you guys fussy?

Gubany: Ahh… fuck. Nothing pops into my head.

Corrado: We just finished doing some recording, and there was something that sort of made me fussy. Normally when we perform, there’s just me on drums and Sacha on guitars. But when we record, we add the bass as a third element, which is sort of in between our two instruments. Bass is hitting strings, rhythmically. It’s not my forte, and it’s not his forte. We both hear musical patterns for the bass, but we can’t explain them to one another. In those moments, I feel very “fussy”. There are musical ideas I have that I want to communicate with him, but I just can’t, and I don’t want to be a dick about it.

Gubany: Yeah, like, I’ll just be holding the bass and staring at him with no idea what he means.

Corrado: But even there, we can usually break things down and figure it out.

Corrado: It’s interesting, man. I was actually thinking about this the other day. All we have is language and words to communicate how we feel to other people, but so much is lost in translation because everyone can attach a different meaning. I think music is good at having a meaning that everyone can feel directly.

Gubany: That kind of reminds me of Peter Griffin’s “What grinds my gears?”

I guess people who are always complaining but who never really do anything about the problem. That grinds my fucking gears.

Banter: What’s a festival or venue that you guys would be most excited to play in the next few seasons?

Gubany: As a Montreal kid, playing Osheaga would be a really cool accomplishment.

Corrado: It would be really fun. Last year we played an Osheaga after party. This year, hopefully we get to do the real thing.

Gubany: It would be a lot of fun. Or maybe the year after. Who knows?

Other than that, playing any festival in the UK would be cool.

Corrado: Yeah, I was gunna’ say, Europe would be nice.

I also think it would be really cool to go to Japan. I feel like because we are so culturally different, it would be interesting to see what the emotional response would be to the show, and whether people can connect with our music.

Gubany: Yeah, we haven’t played a ton of shows outside of Quebec. Our first show was in Brooklyn, and that was a good experience, but it was only our first show… so…

Corrado: In February, we’re playing our first Toronto show, at the Cameron House. We also just bought a van, so it will be a lot easier for us to just get up and go to more shows outside Montreal and outside Quebec.

Corrado: We’re making a new record this year, and we’ll be splitting it in two.

Banter: A side, B side sorta thing?

Gubany: That’s in terms of releases. The first EP was recorded last week, so we’re really excited about it. In terms of shows, we actually just got signed by Preste, and they’ve lined us up for some really cool shows in the upcoming months. We’ve got five or six lined up in February, and then some more in the spring, in and around Montreal, Quebec City, and

People can expect a very busy year from us. We’re always recording new music, and like we said, just finished some recording last week. We’ve got the shows, but we’re also focused on having a good time and making sure the people who come out are having a good time. That’s the whole goal, ultimately.