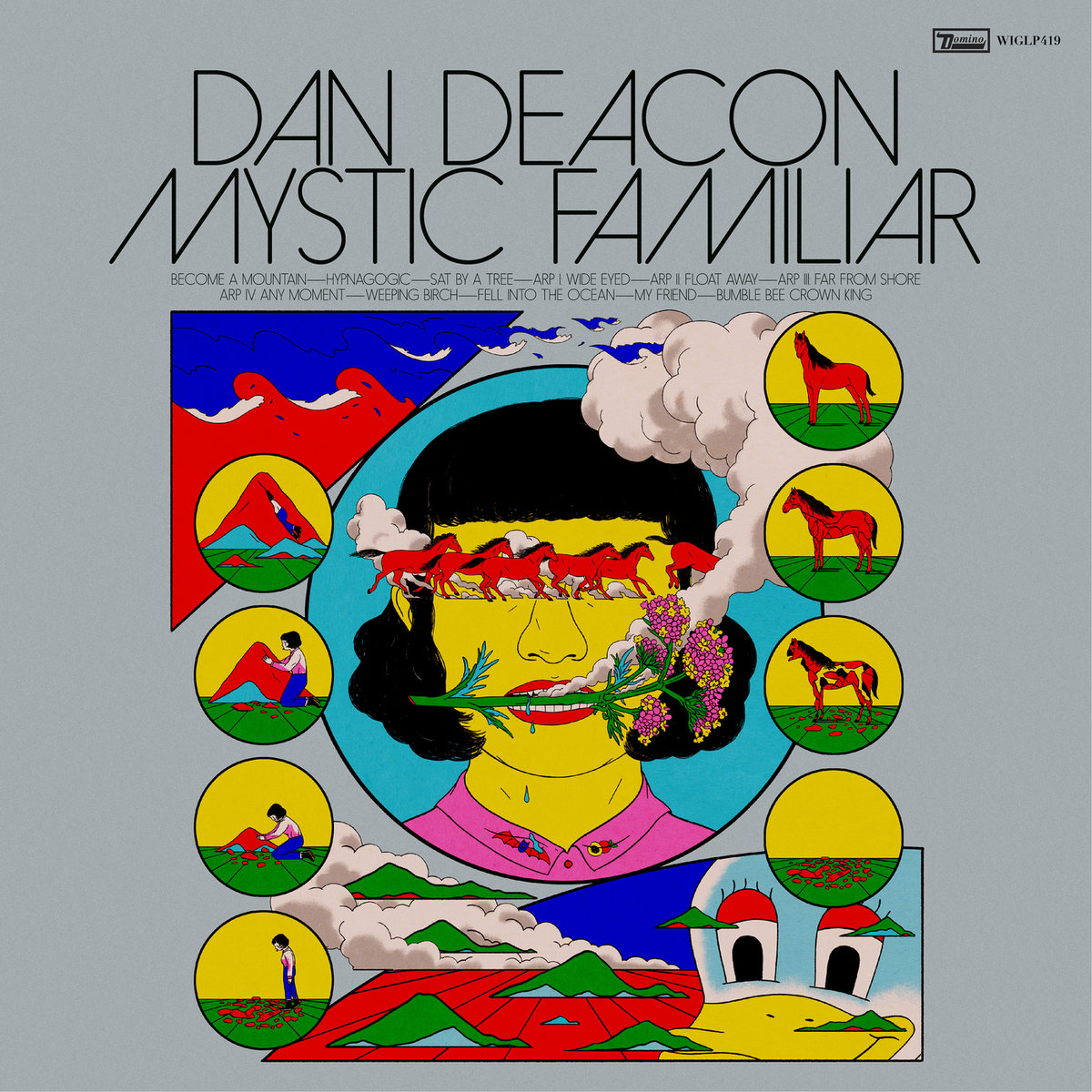 “Become a Mountain,” acts as a sort of mission statement to Mystic Familiar, the imaginative and expansive new album from Dan Deacon. A flurry of programmed pianos gives way to Deacon’s voice, for the first time (at least in my memory) untreated with effects save for a little delay, declaring “all of time is right here, is right now!” Synths, horns, and strings layer on top of each other until the song breaks out into a kaleidoscopic waterfall of sound.

What follows is 44 minutes of pure aural delight, an album inspired by Brian Eno’s “Oblique Strategies” and thoroughly rooted in Baltimore musician Dan Deacon’s whimsical and whirlwind variety of what he likes to call “electronic dance music.” At an often breathtaking pace, synthesizers arpeggiate and drum machines pound, building into gargantuan walls of sound. But this time Deacon incorporates acoustic instruments, both sampling and programming them to add a fresh and dynamic dimension to his music.

One result of this is “Sat by a Tree,” the first single released from the album, the music video of which depicts a time lapse of a (very aware) corpse being consumed by bugs and disintegrating back into the earth. The passage of time and the desire to seize the day are strong themes in the song, suggested by its lyrics, hurried tempo, and repeating synthesizer curlicues. “Wake up! Time’s gone by!” Deacon declares, “It’s a short life, and sadly unrehearsed.”

Another result of Deacon’s acoustic and electric synthesis is the suite of tracks entitled “Arp,” an epic spanning four parts which has that familiar intoxicating crescendo we know and love from Deacon. “Arp III: Far From Shore” is the main event, beginning with a beautiful refrain featuring a free-jazz-esque saxophone solo and building to one of the most mammoth pinnacles in his discography. It all leads to an entire track dedicated to the final note, a diminishing drone whose constituent parts meander off one by one, gingerly returning you back to earth.

Side two is considerably less poppy, but the exception comes in the singalong call-and-response choruses of “Fell Into the Ocean.” Synthesizers soar over electronics reminiscent of steel drums, illustrating a shiny futuristic candy beach party. The slow pulsing bass during the bridge really makes me feel so good, I also wanna write a surf song!

The less catchy bits of Mystic Familiar recall the film work Deacon has been doing in the recent past, scoring the documentaries Rat Film, Time Trial, and Well Groomed. “Weeping Birch” is a play on a couple arpeggiated violin themes, exploring dynamics and mixing in some synths and drums (mostly symbols) to create a delicate but powerful movement. “Hypnagogic” is another of these almost ambient tracks, a meandering but contemplative synthesizer interlude between the first two bangers, “Become a Mountain” and “Sat by a Tree.”

The album comes to a close with “Bumble Bee Crown King,” a track of humongous proportions which blends Deacon’s worlds into a genre I might call ‘in-your-face ambient.’ Busy drums churn away and a (relatively) small synthesizer theme rises into a colossal tower of electronics in just under two minutes, then sweeps up and down and swirls around until you don’t know your right ear from your left.

Mystic Familiar is one of Dan Deacon’s most triumphant works; heart-pumping and ear-pleasing electronic pop music whose climaxes rise like titans out of the musical wilderness, envelop and squeeze you, and finally place you gently down on a bed of the softest and sweetest smelling grass. Deacon’s North American tour starts in Charlottesville, VA on 2/26; his shows are super fun and crowd-participation oriented, he often plays on the floor, and you’ll probably make a new friend!