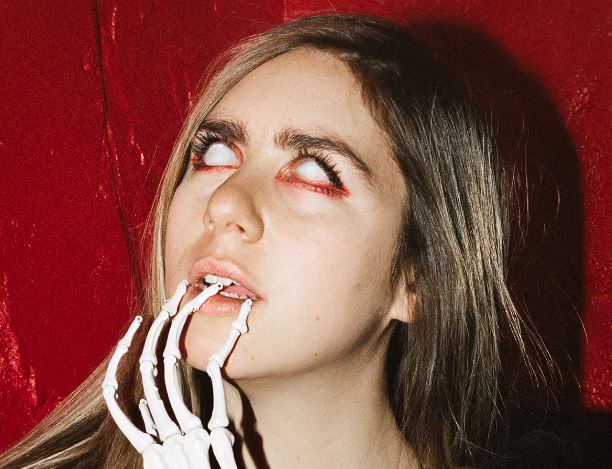 Lydia Képinski is a Montreal-based singer-songwriter, whose debut album Premier juin was released just last year by her own label. The new record came two years after her first release, a suspiciously terse EP that left many new Képinski fans wondering when they would get a taste of more Képi tunes. We caught up with the songstress at M pour Montréal festival to talk performance, music history, and the industry in Quebec.

Banter: You’ve spoken before about how the dinosaurs of the Quebec music industry just aren’t ready for younger Gen Y/Gen Z artists to so behavely so coarsely in public. Aren’t you guys way more tame than what was going on in the 60s and 70s?

Képinski: What do you mean by tame?

Képinski: I don’t even have a hypothesis for that. Maybe it’s just part of human life to be wild in your 20s and 30s and become afraid of everything later. Another aspect is LSD. In the 70s it was a big thing, and I’ve experienced it—it can definitely open your mind. I haven’t done the full-blown LSD trip where your mind is changed forever, but I think they were all on LSD and they were more open. We have an American perception of that time, but I’m not sure that in Quebec it was exactly like that.

Banter: Can you tell us a little bit about how you came up with the idea for remixing Premier juin with a bunch of different producers?

Képinski: I picked the people by searching on Instagram, essentially, and there was one person I met in Paris (the project’s name is Robert Robert); so I sent him the idea of remixing the album track by track. DJs usually have their SoundCloud linked, so I spent like an entire month just listening to SoundCloud DJs. When I heard something interesting, I would just get in touch with the person and see if it worked.

Banter: No English songs eh? Have you ever thought about breaking into that market?

Képinski: I don’t think it’s my purpose, per se. I think there are already a lot of people who are writing in English in the world and it would be more of a financial calculation to access an English market rather than an artistic decision.

Banter: I don’t want to talk genres, but I’m going to anyways, so here’s your big Montreal chance to self-define. Are you going to go with synth-pop, pop-rock, something else?

Képinski: I think we’re in a postmodern era where everyone is coding genres, mixing them, and my blend would be pop, 80s rock, and electronic.

Banter: Do you think the heavy subsidization of arts and culture (in this case, specifically music production) in Quebec creates a sort of imposter syndrome? That is to say, compared to American artists who have to be infinitely more popular just to earn their first dollar.

Képinski: If there weren’t the system of a subsidized music industry in Quebec, we wouldn’t have music in Quebec, and we wouldn’t have culture. It’s important to have subsidies because the market is simply too small, a niche artists wouldn’t even be able to exist with a population of 7 or 8 million. If it weren’t for the state, nobody in Quebec would be able to do music.

Banter: How does that affect the mentality of artists in Quebec compared to artists in more free market parts of the world where they have to have real success on the market, have fans who buy albums, fans who buy T-shirts, who stream songs?

Képinski: In fact, self-made musicians are a myth. Because, there are too many big players in a country like the United States, there are only a few bigwigs who make all the money and it’s hardly a question of talent. We’re a smaller market, so we’re more protective of the industry in Quebec. And it’s not like we’re making a killing, but we’re making enough, and we all know it’s subsidized. But, that allows us to do some really cool things. For example, I’m getting financial support to go on tour in France, obviously I could never pay for a project like that out of my own pocket.

In the States, I don’t even comprehend the set up because there are bands who make it to SXSW and their label is paying for everything, 100%. It’s like rappers, they sell drugs, and then with the money they release an album.

I think it’s totally a myth, the idea of a self-made artist.

The subsidies also create a double-edged sword; there are projects that nobody is really listening to, but because the person is semi-famous and has been in the subsidized system long enough they’ll keep getting funded instead of new artists. But honestly, we’re doing a lot of great things in Quebec.