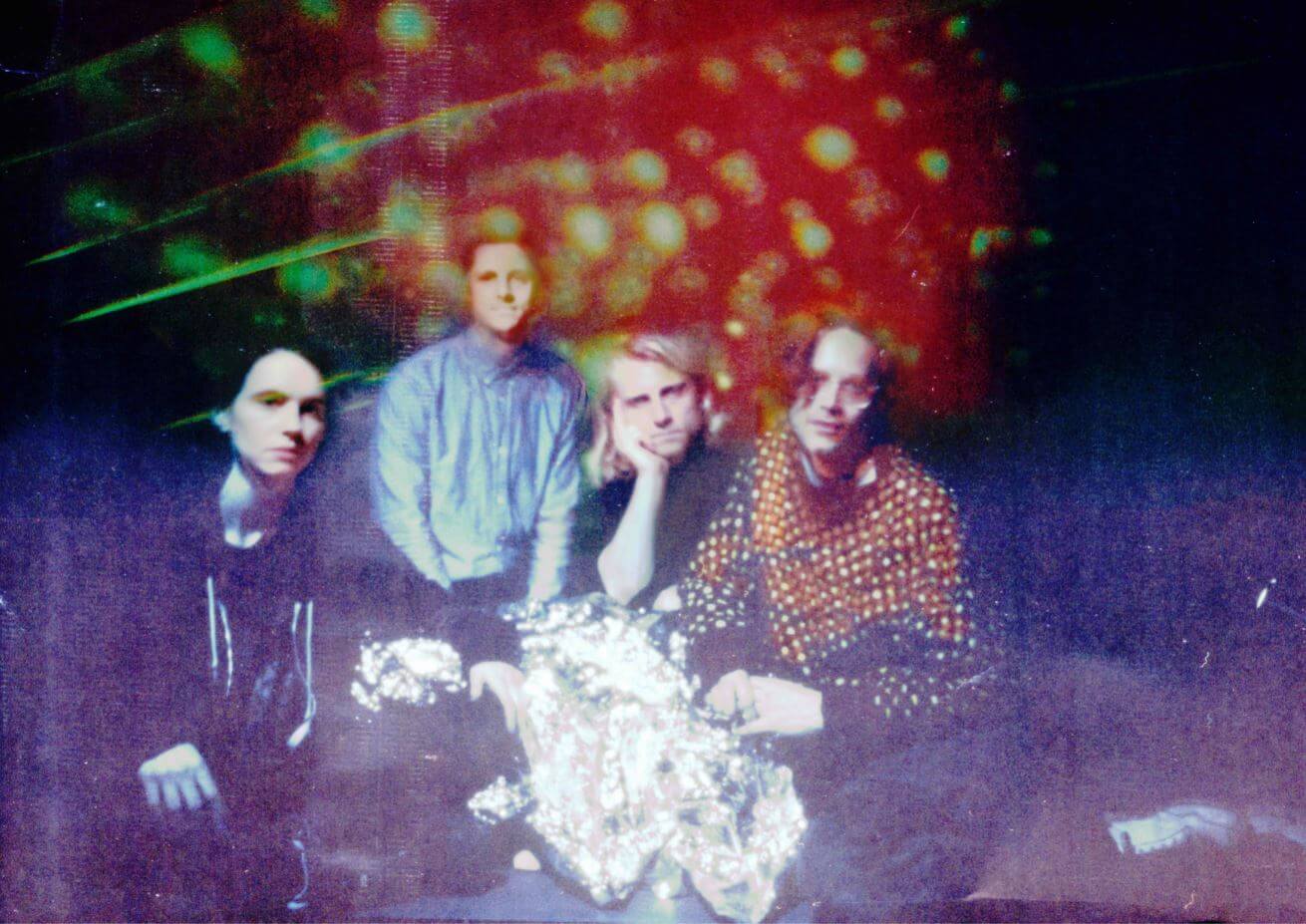 Organ Mood is the product of a decade long relationship between Christophe Lamarche-Ledoux (Chocolat, feu doux), and Mathieu Jacques. The group has recently added another Mathieu, Mathieu Charbonneau and an Estelle, Estelle Frenette-Vallières (Les Louanges, Chocolat, Bernard Adamus). The former is on synth and the latter contributes to the visual aspect of the project with ‘idiosyncratic’ lighting. In anticipation of Organ Mood’s upcoming album, Indivisible (available October 18th via Dare to Care Records), we spoke with Lamarche-Ledoux to get a better sense of the group’s trajectory.

Banter: What do you feel is the difference in the production process between Indivisible and your earlier records like Comme si nous étions déjà libres, or Consciemment Inconsciemment?

Lamarche-Ledoux: Just the fact that the band has a past, it’s a long past, and there’s like a will to try to make something new, take new risks we haven’t taken before. And, one of the ways that it’s quite different from the past is that now we have Mathieu Charbonneau with us making music. But, in terms of the process; collaborating with Mathieu [Charbonneau] and Estelle who are both visual artists, that part didn’t change much. Creating the music was quite different though; there was quite a bit of back and forth between me and Mathieu [Charbonneau].

Before, it was really just me working alone and having no feedback, no input from anyone else while creating. Now, I’m more in the position of being a songwriter and being able to bounce ideas off of a fellow musician, which has created a bunch of new sounds. Because Mathieu is using modular synths as well, it’s a very different approach, almost a keyboard-less approach. The interface is not necessarily keys and notes, it can be triggers and drones and things that are more continuous. Before, we had a very keyboard[y] approach, like a piano keyboard triggering sounds—now the way we layer up the sounds is more abstract.

Banter: I don’t know how deliberate this was, but I noticed on the album that from the fourth track “The end of roadkill,” through the titular fifth track “Indivisible, version guerilla graft,” there was a noticeable crescendo. How will that play out in a live show?

Lamarche-Ledoux: I guess we got that from doing so many live shows and confronting an unknown crowd every time. We toured for a while, and did a bunch of shows where we weren’t playing in front of our audience, we were playing in front of other people’s audience. Confronting that sort of crowd, you have to find a strategy to win them over and get them into the beat. Building confidence and momentum are important. So, that sort of crescendo and keeping the upbeat stuff for the end is part of our broader live strategy. I guess we just did on the album what we do live. I don’t know if that’s a good thing, but live performance clearly contaminates our approach to building a set list.

Banter: You guys have a few touring dates coming up in November and December. What should a captive audience understand about the equality and interactivity of the in-person Organ Mood experience?

Lamarche-Ledoux: There’s a lot that’s changing in the formation of the show. We’re not sure yet—it seems crazy because the release is next week—but we’re entering a phase where we’re rehearsing and rethinking how we’re going to do the live show. I think in the past our main focus was on not creating a distance between us and the public. We’ve always addressed the public in a very non-scripted, honest, less-prepared way. You know, when you go see a show, there’s this formulaic aspect where you are expecting the performance to be a certain way. We try not to be programmed in that sense.

Banter: So the intimacy is important?

Lamarche-Ledoux: Yeah, and even above the intimacy is not creating that gap in between the artist in the spotlight who’s facing the public on a different level. We just want to be among people, as if we’re all just part of the event together and it doesn’t matter what your position is within that framework.

Banter: Do you think that the members of Organ Mood see their involvement as an art project? A band? A loose experience?

Lamarche-Ledoux: It’s actually pretty solid in the sense that we’ve been doing this for like ten years. It’s sort of crystallized into what we’re doing now, but I’m not sure what we’ll be doing in the future; even next week is not entirely clear. But we’ve realized after doing this for so long that there’s a sense of belonging to what we’re doing. It’s not about doing something that appeals to a certain crowd, but rather finding a sense of freedom where we can explore and create.

We all work on other projects, and when we do other stuff there is so much compromise implicated in the collaboration. You know, when I do music for cinema or theatre I’m the creator, but I have to shape what I’m doing for a clear purpose. Organ Mood basically has no clear purpose, so the question becomes: what should we do when we have no clear purpose?

Banter: Do you think there’s continuity between other projects like Chocolat or feu doux and Organ Mood?

Lamarche-Ledoux: I think there’s continuity between feu doux and Organ Mood for sure, but feu doux has a clear purpose. It’s not the exact same framework of freedom. We want to make music that you can sleep on. Organ Mood has not been as clear as that in terms of purpose. But yeah, there’s a sort of continuity. However, I think that Chocolat is completely different. It’s essentially a rock band that’s trying to express a fictional identity by combining very different personalities and it ends up being a very different process.