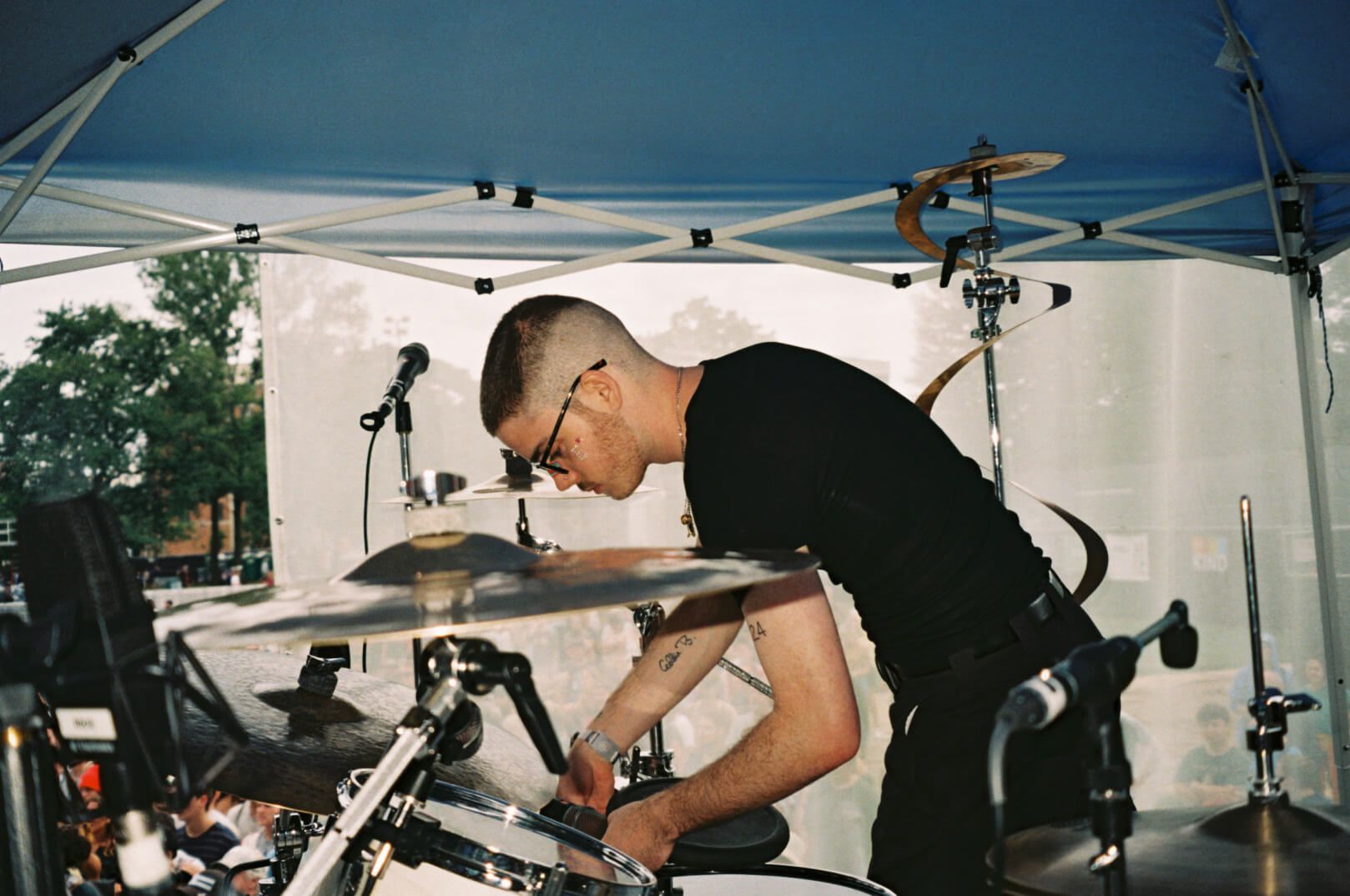 Eddie Burns is a product of Chicago’s deep and sprightly musical pulse. Currently, he’s drumming for Clairo on Khalid’s Free Spirit Tour, but that’s only one of the projects he has on the go. He’s also making a name for himself as a producer, collaborating with some of the most successful players in Chicago’s scene, and as a member of the eponymous Burns Twins, along with his brother Isaac.

Banter: You come from a very musical family, with your brother as the other half of the Burns Twins and your father having had a prolific career as a conductor and trumpeter. Do you think that there was a certain inevitability in your gravitation towards music?

Burns: Yeah, absolutely. 100%. In terms of being around my dad and going to his shows since I was in the womb, you know? He would always be around a lot of musicians from around the world⁠—places like the Gambia and India. He used to play a lot of shit from around the world, and that really inspired the sort of music that I’m into today. He’s also an educator, and he’s someone who educated a lot of the people I’ve learned from. A lot of Chance’s musicians, like Nico [trumpet]—my dad taught him. He also taught Will Miller from the O’My’s, and I actually ended up joining that group. So yeah, definitely some inevitably in the sense that I grew up with so many young creatives and trumpet players in my home who eventually started doing really cool shit. But yeah, back then, they were all really young. They were all sixteen-year-olds collaborating and producing together. So growing up in a family and city like mine, it was pretty natural, because the community had already taught us so much even before we had any sort of professional career.

Banter: Isaac, your twin, plays the trumpet. Do you think there’s anything about your temperaments that makes him more suited to that instrument and you more suited to the drums? Does the stereotype of the high-strung drummer apply?

Burns: Most people that I meet for the first time are actually pretty surprised when they find out I’m a drummer. I mean, I don’t “act like a drummer”. Folks are like, “I would’ve thought he plays guitar or something.” So I wouldn’t necessarily say that it’s a personality thing. I don’t think I’m high-strung like some people might think of drummers. I’m usually just a laid back guy. I’m goofy and silly, and I don’t party a ton or go crazy. But I don’t know if our differences are entirely due to personality when it comes to musical tastes. When we’re producing, I’m probably more laid back… I’m into stuff that’s more chill and vibey, whereas he’s more into stuff like gospel chop videos, or like, really fucking complicated, crazy time signature, Middle Eastern jazz⁠—I like that stuff, but I’d say he’s actually more intense than me when it comes to music.

Banter: Wicked. Okay, so as you mentioned, you’re from Chicago, a city that has one of the most vibrant and diverse musical histories anywhere on the planet. Soul, jazz, R&B, rap, blues, gospel, house music (a lot of people trace that entire genre back to Chicago). As someone whose work involves a lot of these genres, is there one movement in particular that you think will stand out to define the city over the next few years?

Burns: I don’t know if there will be a specific genre that stands alone. You know, in terms of artists coming out of Chicago, you have a lot of really big rappers. You’ve got the Chance generation with people like Noname, Saba, Mick Jenkins, Smino. They’re a generation of artists who people outside of Chicago tend to associate with the city. But, again, because they were so impactful on the community, you’ve got so many young kids coming up now who are really artistic and are grinding without really thinking about a specific movement. They’re just a bunch of teenagers who have been surrounded by different styles of music their whole lives, and they want to create. A lot of my friends and people I know from the city started young, going to open mics and stuff like that since early high school. So I’m just excited to see what happens, because in three or four years from now, when the kids who are highschool freshmen get to be my age, and the people my age are later on in our careers, it’s going to be dangerous in terms of how good these artists really are. The culture of the city is so focused on music. Kids will use the two minutes they get for break in between classes to come up with beats and stuff like that. So yeah… it’s going to be really inspiring.

Banter: At a time when it’s easier than ever to collaborate with artists from different genres, do you think there’s any creative utility in describing yourself specifically as, say, an indie-pop, artist, or an R&B artist, or a neo-lounge artist?

Burns: In my experience, the best way to come at something when you get into the studio is to just try to create an energy and use whatever emotion you guys are feeling in that moment. I don’t really like the idea of genres when I’m producing. Sometimes, you’ll get in a space where you and the people you’re working with want something specific, like, “Okay, we’re making some hard shit today.” And then people will call that rap, or they’ll call it trap, or whatever. Usually I just try to put down come chords, and I’ll ask whatever artist I’m working with what they’re feeling. Working with my friend Shawnee Dez is a good example; she’s someone to really watch out for. We actually just released a song, and that was really effortless because I’ll just put something down, and she’ll just start singing over it—and whatever we create will just be whatever genre it is. People are always going to want to label stuff and put it in categories, which is cool, but whether it’s Clairo, Shawnee, or Chance, artists just want to create what they’re feeling. A lot of the time it’s way easier to think about creating in terms of which artist you’re working with rather than which genre of music they make. So say I’m going to do something with DaBaby, that’ll be some hard shit, and I won’t come at it with really chill chords. If you’re trying to create based on genre, you’ll just be referencing something that’s already been done.

Banter: On the Free Spirit Tour, you’re consistently playing shows that have upwards of 25k people in attendance in venues that are hundreds if not thousands of miles apart. What are some of the logistical challenges you have to deal with as a musician with so much equipment?

Burns: Well, at this point, we have a pretty good crew that does most of that stuff. It’s pretty ideal on this tour; there really isn’t anything I can complain about. But yeah, there were a good 8-10 years of lugging my own shit, so it’s cool to have other people helping with that now. I guess the only thing that might help would be a drum-tech, but even that isn’t really something I need.

For me, I guess the bigger challenge that goes along with touring is just how taxing and tiring it can be on your body. Even if you’re resting well, there’s so much travelling that you can get sick and run-down pretty easily. When you’re on stage, you’re always using your whole body to drum, so it can get draining after a long stretch of touring—but even that isn’t too bad.

Banter: So far, what stadium has provided the best atmosphere?

Burns: For me, there are a few. Some of the other members of the band, Dejon, the bassist, and Hayley, the guitarist/keyboard, are also from Chicago, so it was pretty crazy to play at the United Center. I used to go to Bulls games all the time as a kid with my grandma and friends and family. It was a really wild experience. It was Hayley’s mom’s birthday, and her family was there, and my family was there. My grandma actually passed away recently, and we had a lot of memories in that stadium, so it was just a really emotional experience. It was really surreal to finally be in this place that was such a big part of my childhood, and to be doing what I love in front of the people I care about.

Playing the iconic arenas like Madison Square Gardens and the Staples Center was obviously amazing. In terms of just raw energy, Houston always has really good crowds for some reason. In terms of food, which we like to rate, Oakland [Oracle] has the best catering.

Banter: What’s it like taking on so many projects at once? Is it easier because it allows you to transfer inspiration or creativity from one project for another, or is it something that prevents you from ever dedicating 100% of yourself?

Burns: Honestly, I haven’t really thought about making music in that way before. I mean, sometimes it’s challenging. In a perfect world, you would want to put everything into every project you work on. There’s this one artist I’m working with called Qari who’s really buzzing right now. When I do stuff with him, we can usually make things work while I’m on the road because of how we produce rap. With other artists, like Shawnee Dez, things go a lot faster when you’re in the same room together; she’s one of those people who you can sit down with, play some chords, and she’ll have an idea for the vocals in like 5 minutes. So doing the Free Spirit Tour obviously makes that challenging because you’re on the road for months at a time. But we still make things work by sending beats and song ideas and such while we’re in different cities.