Juice B Crypts by Battles: A Review 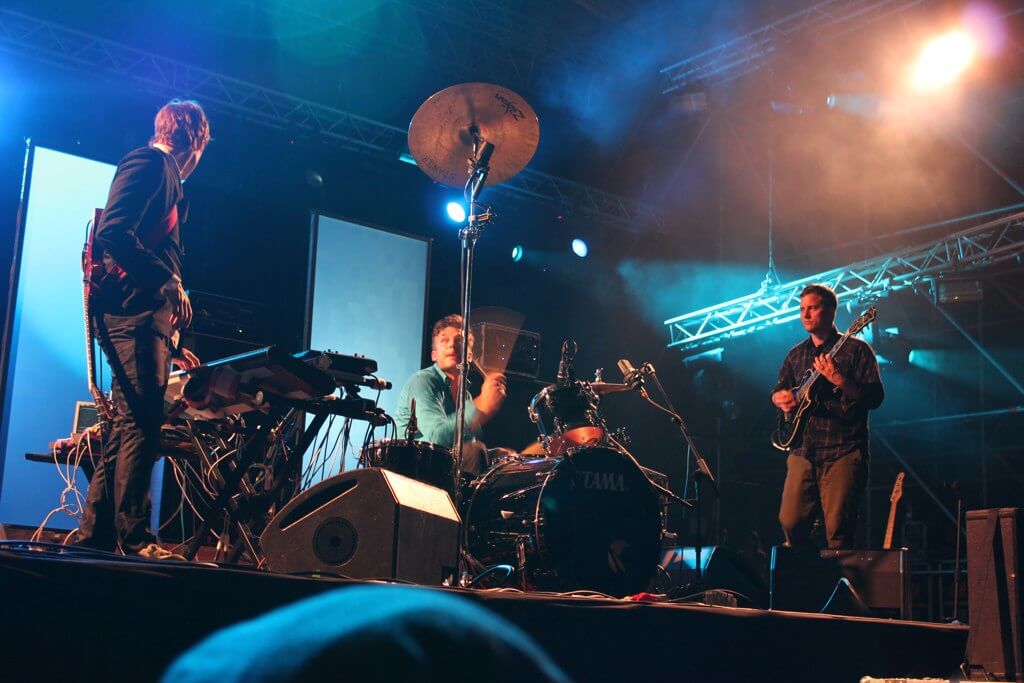 Juice B Crypts is only Battles’ fourth album, but their craft is mastered and their sound is fully their own. You can hear it especially on “Fort Greene Park,” a track right in the middle of the record, which offers short respite from an onslaught of catchy beeps and boops. Suave guitars slide seductively through your head until a bopping drum beat picks up and synths pierce the groove. This is a classic Battles instrumental, an impeccably produced ambient gem.

Guitarist and synthist Ian Williams and drummer John Stanier return with more repetition, variation, and resolution on this album. Their complex but undeniably hooky math rock is bubblier than ever over the eleven tracks, spinning your head around and around through odd time signatures and endless iterations. The titular song, “Juice B Crypts” moves through many moods, from a joyous drum solo to a sharp 8-bit synth jam, to a candy-land of sugary bloops. The music feels at times like being stuck inside a computer overloaded with data, but Williams and Stanier never take you too far off the edge.

Vocals are shared by several featured artists throughout the album, lending an interesting variety of flavors to Battles’ distinctive aesthetic. Yes frontman Jon Anderson appears on "Sugar Foot,” a song whose tempo and wonky melodies speak almost as a thesis for the record. Anderson’s vocals blend in with rocking guitars to create a proggy fog, and float through a rubber forest of synths and heavily-treated guitar, snares snapping like sticks underfoot.

Williams’ signature twangy, old-west-carnival guitar sound is present throughout a few tracks, like in “Titanium 2 Step,” a ride through a wonky, haunted fairground. No-wave stalwart Sal Principato makes an appearance as the nightmarish carnie screaming into his microphone “Taking too long to figure it out, / Taking too long to get it right!”

Williams and Stanier dabble in hip hop on “Izm,” employing Seattle duo Shabazz Palaces to do the honors (this is a reunion for the four; they also collaborated Battles’ 2012 remix album Dross Glop). Battles’ instrumentals fit seamlessly under Ishmael Butler a.k.a. Palaceer Lazaro’s abstract lyrics. If you heard this track out of the context of the album you might think the whole thing was a rap album.

Battles close their Juice B Crypts with a two track through a side-scrolling adventure complete with pits and traps and nervous energy. All the while Tune-Yards’ Merrill Garbus soliloquizes about the surreal dreamscape of inequality and exasperation that many of us live every day. The second track squeaks along at a breakneck pace, sounding almost like a tape rewinding. This brings us literally back to the beginning again in a rare moment of quiet vulnerability when a lone piano closes the album with the same arpeggio it started with.

What at first listen sounds jumbled and chaotic is in reality, meticulously and painstakingly pieced together to create a joyous, driving, and beautiful piece of art. It is at once political in its lyrics and creation, but at the same time it is a welcome escape; a 41 minute odyssey through an angular, glossed-up, psychedelic world.