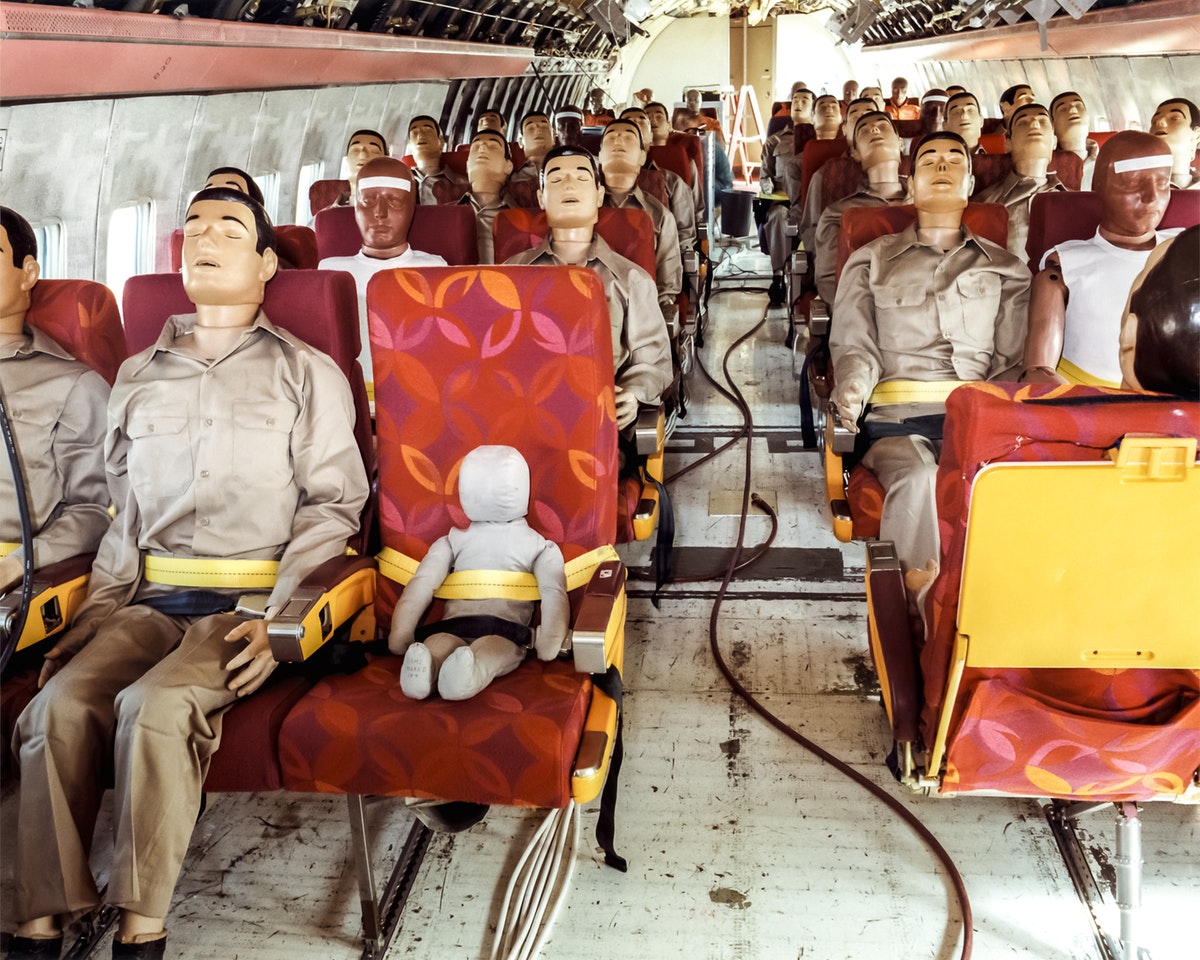 Much like food courts, DMV lobbies, and public swimming pools, commercial airliners seem to be perfectly engineered for producing misanthropes.

And indeed, this similar experiential result seems to be the consequence of some indelibly similar attributes.

Planes are like food courts in the sense that a faceless Monopoly Man, in some abstract way, has corralled you and hundreds of other sheep into a maximally profitable neoliberal juicer of capital. Staring back at yourself in the image of his glistening monocle, you bahhhh defiantly. You hate it, and you hate him, but you eat nonetheless. Bon appetit.

They’re like DMV lobbies in the sense that everything seems so tremendously inefficient, and everyone you have to interact with seems so offensively inept. To be certain, you are offended.

Thirdly, and most importantly, they’re like public swimming pools in the sense that you are quite literally steeping yourself in a stew of strangers. Every sneeze, every drop of sweat, every molecule of lord knows what else—it all contributes to a miasma that’s as sickening as it is mysterious.

With all of this in mind, it’s worth acknowledging that a great deal of the attendant discomfort of airborne travel can be avoided, if only you’re lucky enough to travel with people who understand how to fly on a fucking airplane.

This is me helping everyone on your next flight get lucky.

Being a good flyer starts long before you arrive at the airport, and indeed, a shocking amount of misery can be avoided if you dress yourself like a grown adult.

I’m not saying that there’s a specific dress code; “smart casual” and “informal,” for example, mean different things to different people. Nobody is demanding that you wear a three-piece stroller or a satin gown whenever you take to the skies. Use your head, and exercise a modicum of discretion. Nailing the sartorial dimension of flying really isn’t that complicated:

2. Wear something that covers all of your legs (like pants or a skirt).

3. Wear something that covers all of your upper body (like a regular shirt, or perhaps a sweater, or maybe a jacket).

What are the odds that the person sitting next to you wants to see your doughy midriff or your unsightly toes? Probably not that high.

You’re not going to the beach, and you’re not going to a slumber party. Frankly, I don’t care how comfortable your strapless muumuu is, and I don’t give a flying fuck if you prefer the breezy feel of your slaggy new flip-flops.

People have started doing this strange thing where they deliberately put their carry-on baggage in the overhead compartments three rows in front of them so that they can make sure nothing gets stolen.

Newsflash: nobody wants your tattered JanSport or the half-eaten bag of Ruffles that you stuffed it with at the gate.

Save everybody the headache and use the overhead space above your own row.

Oh, and if you get to your aisle seat before the middle and window passengers in your row have boarded, don’t buckle up and put down your tray for a little pre-flight laptop session. Do you think they’re just going to hurdle over you? Use your brain, jackass.

I’ll start with what I suspect is the least controversial but most commonly violated convention of the row: the right of armrest. As a petty recompense for being sandwiched and windowless, the ill-fated occupier of the middle seat has an absolute claim on both of his or her armrests. Note the word “absolute.” If you’re not in the middle, those armrests (in their entirety) are off-limits to you—the front half, the back half, everything. It’s all off-limits.

Ah, sweet, sacred limits. Like most aspects of life, knowing and respecting them is the key to being a decent human being.

When you sit down, imagine a vertical plane that extends from your seat. Let this delineate your personal space, and treat it as a sort of short-term cell. You’re the prisoner, but you’re also the screw. Get in the cell and stay there. Do not pass Go; Do not collect $200.

And just to be clear, don’t let *any* part of yourself out of the cell.

I get that this can be tough for fat people. Splurge (lol), and book two seats if you need to. I’m not joking. Take it out of next week’s trough budget.

This can also be tough for normal-sized people with obtrusive hair. If your hair does have a proclivity for expansionism, bring a scarf or wrap or whatever the fuck you need to do. Just figure it out.  I shouldn’t be blowing errant strands out of my face like I’m getting tea bagged by a Persian dude.

You know the idiom, “There’s more than one way to skin a cat”? How about, “All roads lead to Rome”?

When it comes to disembarking an airplane, however, there is exactly one acceptable procedure, and it isn’t particularly complicated:

At the exact moment that the last person in the row in front of you (or in the seats directly across from you) starts walking up the aisle, stand up, grab your bag, and follow them. You have zero right to go before the people in the rows ahead of you, just as the people behind you have zero right to go before you. Don’t acquiesce. Don’t be a pushover. All that does is embolden them, extending their barbaric insurrection for yet another flight.

It sounds quite straightforward, but reliably dozens of people on every flight I’ve ever been on have flouted this civilizing covenant.

I, for one, don’t think society is harsh enough toward people who somehow manage to fuck it up. A frustrated eye-roll coupled with an audible harrumph isn’t nearly a sufficient response. If I were in charge, malfeasors would be dragged out on the tarmac and juiced through a turbine before the next flight, Canada goose-style.