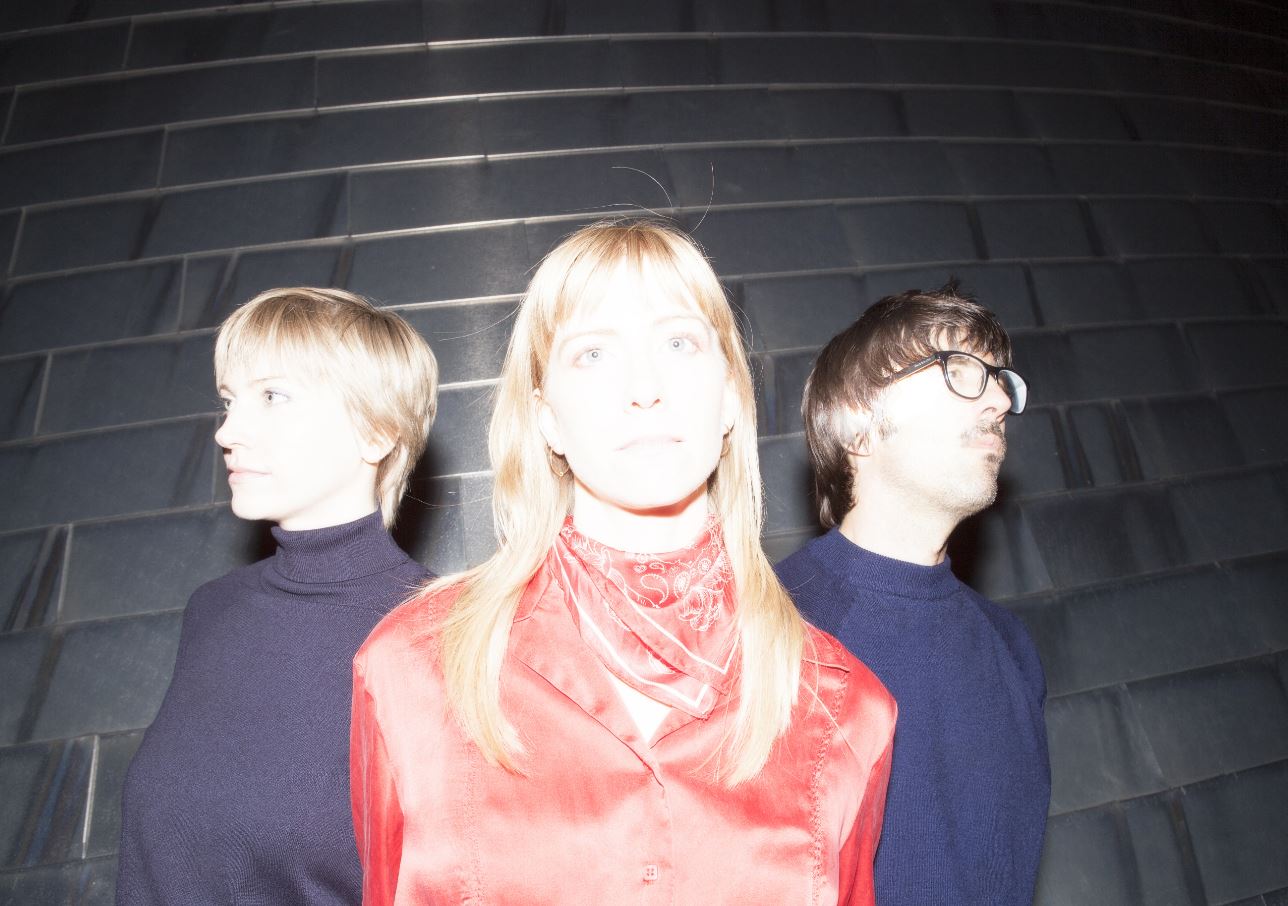 After establishing themselves as the Muscadettes, a garage-rock staple in Montreal’s indie music scene, twin sisters Chantal and Kathleen Ambridge have recalibrated their creative aesthetic.

Believe us; they’re dialed in.

The project speaks for itself, and so do they. We know because we spoke with them.

Chantal: Oh, wow. That’s way back. It’s probably something that my mom was listening to at the time, like, the Celine Dion D’Eux album or Jagged Little Pill by Alanis Morissette or something like that. We would have been pretty young around that time... maybe seven years old.

Augustin: Me, I have really good musical memories, but it’s not exactly a band. At the place where I grew up, I have pictures of me as a baby on a Wurlitzer piano — it belonged to my grandmother, and we have that at home.

I remember, when I was a kid, hearing her play, “I Just Called to Say I Love You.” That was one of my first musical memories; it was oriented toward an instrument, and I really discovered that instrument later when I ended up playing the keyboard and stuff like that.

Chantal: My mom actually has a story that we don’t remember because we were so young, but we were in the car with her, and there was this song on the radio by Jean Pierre-Ferland, and we got home and Kat was like, “No, we have to stay in the car and finish the song!” and it’s just a super sensitive, sentimental memory.

Kathleen: Yeah, aha, couldn’t go in until we finished the song.

Banter: Ahh, yes. I’ve definitely been in that situation once or twice before.

Okay, shifting more into the band’s history  — what prompted the change in focus from the Muscadettes to Penny Diving?

Chantal: We had just put out two EPs as the Muscadettes, and it just felt like we were growing out of it. We wanted to write some different stuff, and we felt like the Muscadettes was confined to a very specific style that didn’t necessarily fit with what we felt like doing.

Kathleen: Yeah, and like, the new songs that she was writing didn’t really fit that [Muscadettes] style. It would have been hard for us to evolve within that band. We just felt like it was time to start something new.

Chantal: Yeah, so we basically just stopped that project. We had good labels and a good booker and all of that, but we just figured that we needed to do something else.

I don’t really think you can be successful in anything if your heart’s not in it. You know, the next step was to create another record…

Augustin: … while keeping those songs just as baggage…

Chantal: Exactly, so, it wouldn’t have been in alignment with who we were as artists anymore. We were really excited about starting something new, from the very first time we started talking about the project.

Kathleen: Yeah, as soon as you talked about it with me, I was definitely on the same page. We both wanted to explore something different with the new compositions. The whole process was very natural.

Banter: At this point in your careers, you’ve all done a decent number of interviews. What’s something that you wish more journalists would ask you about?

Kathleen: I think the hardest question for us is when we’re asked to describe our music. It’s just hard for us to…

Augustin: … to put a name on it… to put a label on it… That’s something that never really works for us.

Kathleen: Yeah. Our music isn’t particularly easy to label or put in one specific jar because there are a lot of different influences in it.

Chantal: But other than that, we haven’t had super annoying questions about, you know, being girls in a band, or anything like, which is good. That’s not really something that we want to get into.

Augustin: One important aspect of life as a musician that’s more frequently discussed these days is — and that should be talked more about in music interviews — is the whole issue of mental health in the music industry. It’s a sensible topic, and I really do feel that it’s important.

This year, it was discussed more than usual, even in the francophone media. You know, you had Hubert Lenoir on Tout Le Monde En Parle who just sort of made a crack at how sometimes you just want to set yourself on fire.

Anyway, it’s something that can be talked about more because there are a lot of people who struggle and a lot of competition and constant reflection.

Kathleen: Yeah. It’s not necessarily an easy place to be in. Even “successful” musicians don’t necessarily make that much money. There are a lot of people who are working really hard who may not be seeing the fruit of all that hard work.

Banter: Musicians, and I guess artists more generally, have a habit of raving about how great it is to live in Montreal. What’s a challenge of living here that you think gets overlooked?

Chantal: Well I think one challenge that might apply more to us than some other groups is the issue of language.

Kathleen: … being francophone and anglophone, it’s hard for us to really be in one camp. We have one foot in each, and that isn’t always a good thing. It can make it hard for us to identify or connect or fit in with a linguistic community.

Chantal: A lot of our friends and people we know from the music industry are more clearly in the francophone scene. But since we’re bilingual in an English band, it’s sometimes difficult for us.

Augustin: That issue is circumstantial for us [Penny Diving]. When I was playing in a francophone band, Malajube, in 2005, 2006, we did end up establishing a foot in the english scene, and that did help us. We had a foot in both communities, and that was a good thing because we were booking shows like POP Montreal but also more francophone shows.

Kathleen: As much as I think that it can be tricky sometimes, I guess the bilingual aspect of our group does have the potential to be a good thing.

Chantal: The language issue may also just have something to do with our comfortability in our current scene: venues like Esco with our friends.

Augustin: But this isn’t necessarily an issue or a disadvantage. Some people would say that it’s an advantage.

Augustin: It is a really nice trait of Montreal to have those two cultures together. But it’s just a matter of what you do with it… Where do you position yourself?

Chantal: It’s something that’s unique to the city: there really are two seperate scenes. They mix and overlap, but the francophone music industry is completely different from the anglophone industry.

Banter: Do you think that Thomas’ larger role in Penny Diving compared to the Muscadettes has given the group any fresh legitimacy or clout within the francophone community?

Chantal: I think it does, in some ways, but then again, because our band isn’t really French… I don’t know...

Augustin: Maybe it will as we get bigger, say, if we toured Europe. Maybe I’ll meet some people who know Malajube. I think that Malajube does have some recognition in the US as a francophone band.

Chantal: But we really haven’t noticed it that much… He’s been playing with us for years.

But I guess we also don’t really advertise it that much either.

Kathleen: It’s not something that we’ve been using that much.

Augustin: And there’s the thing of knowing how to use it, right? This was our first record, so we’ll see how it goes. If the media and people want to pick up on that and mention it more, then that’s cool.

Banter: In terms of the performances, when you’re riffing and interacting with the crowds, is that something you guys primarily try to do in French, English, or just play to the crowd?

Kathleen: We really do try to play to the crowd. If we’re in a francophone venue and we feel that most of the people are francophone, we’re going to speak in French. Same thing with social media and articles and radio — we try to switch based on who we’re talking to.

Chantal: We’ll sort of try to write in both. But it is tricky, because sometimes you’ll get flack from people who think that you’re only writing in one for a specific reason. And that’s weird to us because we really are both French and English.

Kathleen: Exactly, like, we were born in the States. Our dad is American and our mother is Quebecoise. So, I think it’s very important for us to be inclusive to the French side of us because that’s a real part of who we are. We don’t want to dismiss it.

Banter: I imagine that some areas and venues might be hard to gauge, in terms of the linguistic demographics. You know, places downtown.

Chantal: Yeah. Sometimes I’ll speak both. It is weird though, like, sometimes you’ll see francophone artists who will only sing in English and only communicate in English on social media. I don’t really see the point in that.

Banter: Yeah, it all seems sort of confusing sometimes.

Okay, so, Big Inhale is out now. What’s on the docket for the rest of 2020? New releases? Big festival appearances? Any spoilers for the fans?

Chantal: The thing is, we’ve been doing everything ourselves so far. We would have liked to have had a label and booker and whole team, but right now, we don’t really have anyone to do that for us.

That said, the release of the album has been going really well. We’ve gotten a lot of positive feedback. But as of now, we’re still applying to festivals for this year — reaching out to people ourselves.

Kathleen: It’s that time of year when we’re doing all of the applications.

We’re also going to release some of the older unreleased songs that we’ve already written at some point later this year, in the next six months or so.

Chantal: We want to play more shows, and I guess it is about time that we go on tour or something.

Augustin: It is just so satisfying to know that stuff is finally coming out and that the band is alive. We were actually just talking about it on our way over here. We are going to do everything that we can to keep riding the wave.

Kathleen: Yeah. We’ve been really busy these past few weeks.

Kathleen: You’re spending all of this time on the project, working on it really hard, at home, sometimes alone, and then having it come out to a positive response, it’s a really nice feeling.

The next step is just playing shows more and releasing more.

Chantal: … just doing what we do: music.