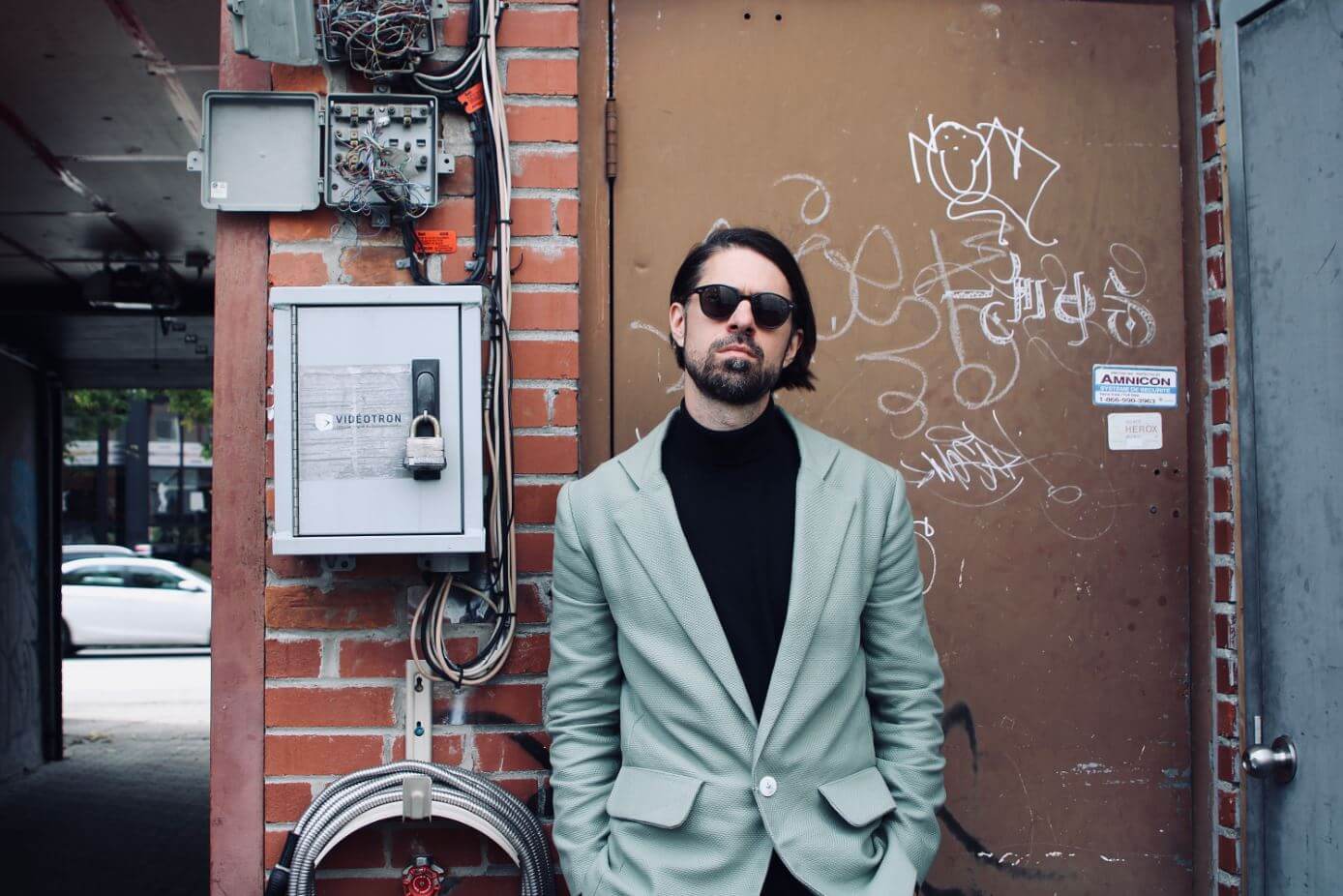 If you know the Montreal indie scene you’ve heard of Chinatown. If you’ve heard of Chinatown you’ve heard of Félix Dyotte. Since the breakup of his former band he’s been cutting out on his own to serious acclaim. His most recent album, Politesses, was released in 2017, with an extended version out for sale just last year. And, if you’re old enough or disturbed enough to still listen to the radio, you’ll have heard his hit with  Évelyne Brochu “C'est l'été, c'est l'été, c'est l'été.” We hung out with Dyotte in Montreal’s Mile End to talk rock & roll among other things.

Banter: I’m nerdy enough for Montreal’s music scene to remember the magic you made with Chinatown. What’s your best memory from that era?

Dyotte: I must say it was a crazy period, but my most vivid memory when I think about that band--and this actually has nothing to do with the name of the band--but we did a tour in China, and I think that every member of the band would agree we weren’t even remotely ready for what it turned out to be. It was a very Beatles-esque type tour with packed venues; we hadn’t even released our first record yet. But, because we were part of Francophone tour across China that was so well organized, we were playing these big full theatres, and we had hour-long autograph sessions. It was so thrilling to us and we were so young that none of us had really traveled that extensively.

So, being all of a sudden in China which was another level especially back in those days. Strangely enough, China in 2008, only ten years ago, was so much different than it is today. I recently went back there as a solo artist and it has changed so much. But, in 2008 China was still wildly different; it was hard to find coffee, it wasn’t on the international scene like it is today. People were dressing differently, the whole thing was very exotic for anyone from, I would say, the Western world. It’s not really like that anymore, it’s super modern. Now everyone is copying everybody, but ten years ago it was intensely surprising.

Banter: How did the production process change between your first eponymous album and the sophomore record Politesses?

Dyotte: Well, I think I acquired some confidence in the sense that: I remember for my first record I was doing a lot of tracks in my living room, using a pretty cheap-ass mic, and realizing often that it sounded like shit. Then, redoing the track and experimenting with my whole production process, using different studios and getting quite complicated. But, the second record, I made almost all of it except for drums, strings, and the instruments which require a big room in order to record, in my home studio. My studio has changed a lot since the first record.

Dyotte: In terms of equipment, in terms of geekiness, and technique. You know, I’ve learned to do a lot of stuff on my own and that’s also about confidence. I’m not sure that I would have been unable to do certain things two years ago, but I did build a studio. The experience of a first record is that you realize “oh yeah this was sort of done in a cheap room and it doesn’t sound perfect, but it has charm.” I think that’s confidence. If you can build the confidence yourself instead of trusting the almighty power of the big studio, you realize you can do stuff on your own. I’m still in that process, but I’m doing it more and more.

Banter: When Canadians from other provinces look at the Quebec music industry they tend to be confused about where the money is coming from. With such a small market, and the advent of music streaming services like Apple Music, and Spotify, how does anyone make money?

Dyotte: I personally try to diversify as much as I can. For me that’s the formula in the sense that I’m a singer-songwriter first and I try to write as many songs as possible for as many other people as I can, but I’m also a producer. I produce my own records which gives you a way better ratio of revenue when the record is doing well. I think that since the 70s, also, the government has built some really awesome support for Francophone artists. Some people criticize that system for being a form of entitlement, or wasting the taxpayer’s money. But, it turns out that it’s simply not that much money, and second of all, it's a very good incentive for artists to push as much as possible and go international. Let’s not forget that there’s a huge scene in France too, which I am not yet a part of, but I have that ambition. It’s all about being diverse and trying to do as many things as possible.

Banter: So you don’t think that the Canadian or Quebec governments are artificially making people rockstars?

Dyotte: No, they’re not. They’re certainly not. They’re trying to help but you either have an audience or you don’t.

Banter: Would you rather cut off your own hand or personally strangle a kitten to death?

Dyotte: That’s so bizarre, we sort of played that game last night my girlfriend and I. She said she wanted to bring back my arm to Mexico when she goes back. She was like, “should I just cut it off?” And I said, “sure go ahead, cut it off.” Honestly, I think I would have to strangle the kitten.

Banter: In your line of work you need your hands...

Dyotte: I do need my hands, and I’m not a vegetarian yet. It would be crazy to me to cut off my own hand before strangling a kitten since I’ve already been responsible for the death of many animals.

Banter: Obviously your recent focus has been on Évelyne Brochu’s album Objets perdus, why was it important for you to contribute?

Dyotte: Well, it was actually more than a contribution because when Évelyne and I decided to make that record it was essentially a band project. I totally encouraged Évelyne to just use her own name because she’s the singer, but the whole thing is a band thing. I’ve had a lot of admiration in the past for composers and songwriters and there was this entire generation of guys in France in the 60s who wrote for other people and just gave their songs away. I’ve always thought that was a fabulous concept, and as a producer I could hear the songs being sung by a girl.

So it was a totally selfless decision not to put myself in front of that project, because I’ve always had this fantasy about writing songs for a feminine voice. Évelyne has always been around; we’ve been friends since we were seventeen and she even did some backing vocals on old Chinatown records. Even before Chinatown I would play in little coffee shops and invite her to do a duet with me, stuff like that. I guess it was always in my mind to do something together, and when we decided to do this project it was so much and such a relief to work with someone who had expectations from me but who was outside the interpretative equation.

Banter: So Évelyne Brochu has always been part of the musical world of Felix Dyotte?

Dyotte: Totally, and I think we’re gonna do more stuff together.

Banter: Do you ever feel a shooting pain and think to yourself: “Oh fuck, maybe I have cancer or whatever?”

Dyotte: I’m very fortunate not to be a hypochondriac, and I feel so lucky because I’ve known hypochondriacs before and it seems like a very difficult mindset to live with. Whenever I feel a pain somewhere, I’m always on the rational side of things. Sometimes I get very obsessive, I work a lot and in the past getting sick has almost been a sort of relief. Finally, I have no responsibility and I love to be in bed. Surprisingly, I don’t get scared, but yeah maybe when I’m seventy I’ll change my stance.

Banter: God forbid, you meet an untimely ending; what occupation would you have the obituary proclaim? Singer-songwriter? Producer?

Dyotte: If I had to choose, singer-songwriter.

Dyotte: Yeah, something like that. Although I haven’t won it yet. I was nominated so many times but I guess they chose shittier songwriters to win in my place.

Banter: Spoilers aside, what’s next on the menu for Felix Dyotte?

Dyotte: I was preparing for this question this morning while I was getting dressed. I know they always ask that. I shouldn’t say too much, but I’m getting back to my solo thing and I have a bunch of stuff coming up, lots of recording. That’s it, can’t say more.