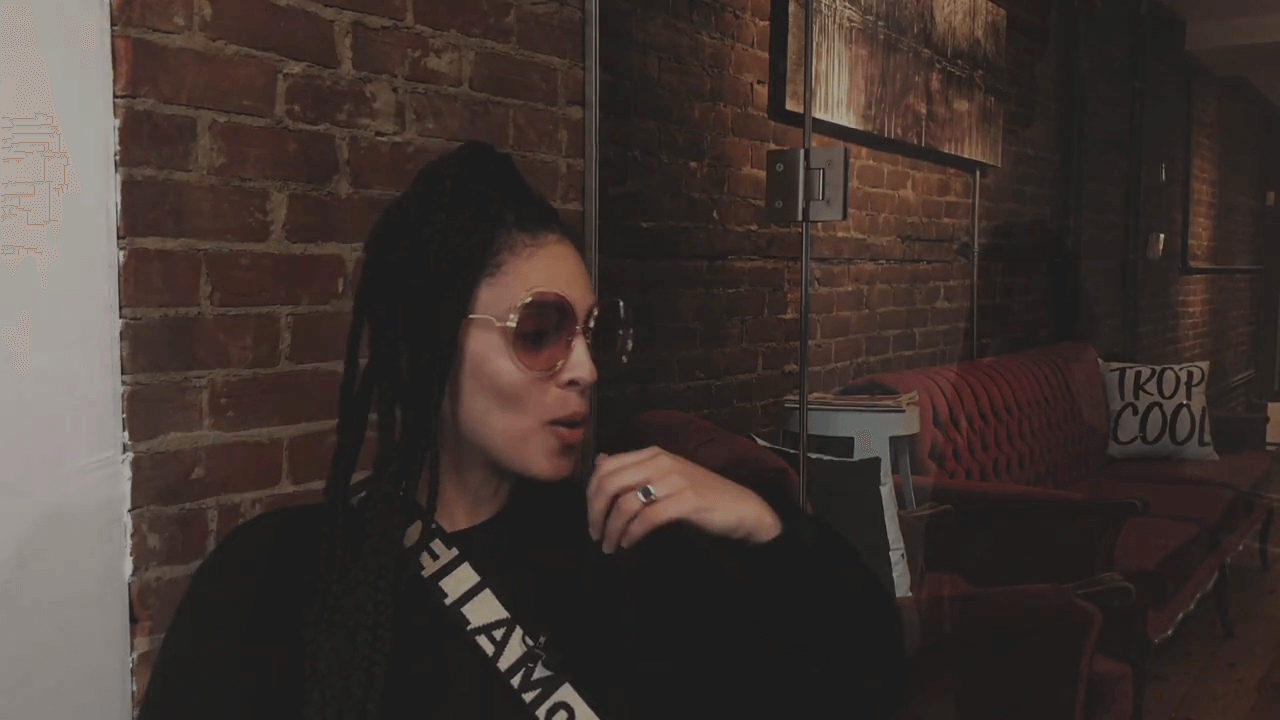 Annie Sama is a Congolese Canadian producer and singer whose braids entrance, whose voice ensnares, and whose fashion instincts radiate in every direction. Fresh off a collab with Belgian DJ Løyd where she featured on his track “Cyborg,” Sama spends most of her time absorbed in a sort of creative whirlwind. In the fall of last year she released her EP Clear which solidified her style as a Grimes-esque electronic chamber pop princess. And, this summer we got a taste of her new sopping wet single “Bae.” What follows is an attempt to use our time with Annie wisely...

Sama: Sagittarius. I’m a Sag. The adventurous type, they say.

Banter: Is that? I have no idea what they say.

Banter: You’ve always experimented with the electronic side of music production; do you think recent collaboration with Løyd a little something extra?

Sama: Actually, one of my songs ‘Treehouse,’ I wrote in Brussels. I did an art residency there. And, basically every time I go into a town I go visit different studios to meet producers and people who are in the industry. So, I met a studio, I think it’s called the Wreck and Roll? They referred me to Løyd. They were like, “you guys should link up and do a collab.” And, he sent me this dope beat.

Banter: And then, ‘Cyborg,’ you guys just laid it down?

Sama: Well, I was here at that point so. I was back in Montreal and I called up my friend and said, “hey I need to record some vocals on that track.” And I did it.

Banter: Where was the best crowd you’ve ever played?

Sama: It’s hard because there are a lot of really good crowds. I would say I have my top three: PY1 this summer was insane, I played in the pyramid, super cool crowd, about a thousand people just dancing. It’s my scene so it was really dope as well to have those 360 degrees of visuals and I really loved the project of the pyramid, so PY1 Nights. The second one was the Okeechobee Festival. It was the first time I was playing on a huge stage. The night before, Kendrick Lamar was playing on the same stage and it was just, for me, such a big event in my career. So Okeechobee. And then, NIKAMOTAN which was here and NIKAMOTAN is a really cool festival, and there was maybe 10, 000 people there.

Banter: You were formerly known as APigeon, what prompted the name change? Why are we now listening to Annie Sama?

Sama: Yeah, I started APigeon. Pigeon is my family last name on my mom’s side. Sama is on my dad’s side it’s my African side. My mom has my Quebec side. And when I started the project it was a little more down-tempo, more movie-like, a more theatrical kind of music. And, I just needed a change, you know I’d been going out a lot and traveling and just going to raves and being part of the electronic music scene, and I just wanted to switch and switch up the visuals. So, getting back to my own name was the best way to do it.

Banter: “Legal” was a big single from 2018. Now that we can all smoke weed, what else should be legal?

Sama: Other drugs. I think if we legalize other drugs as well, we can actually take care of the problem more than having people tied. Other drugs, I would say prostitution, I would legalize that for the safety of the people in the sex industry. I’m very progressive.

Banter: What’s the most trash pickup line you’ve ever heard?

Sama: Oh my god, I’ve heard a lot. But the most trash? I don’t know. To be honest with you I don’t know. Most of the time the guys are very intimidated by me, so I don’t know, I don’t even remember.

I think in the internet era it would be a dick pic.

Sama: Uh yeah, of course. November 8th I have a double single coming out, ‘Animal’ and ‘Ice Cream.’ And, we’re gonna dance, two fun songs, electronic songs. I’m looking forward to having DJs playing it and remixing it.

Banter: Would you rather date someone you love or someone who loves you?

Sama: I mean, both? Why wouldn’t I go under both? You wanna have someone who loves and somebody that you love, and that makes a perfect combination.