A Trip to Psychedelia with Eryn Temple 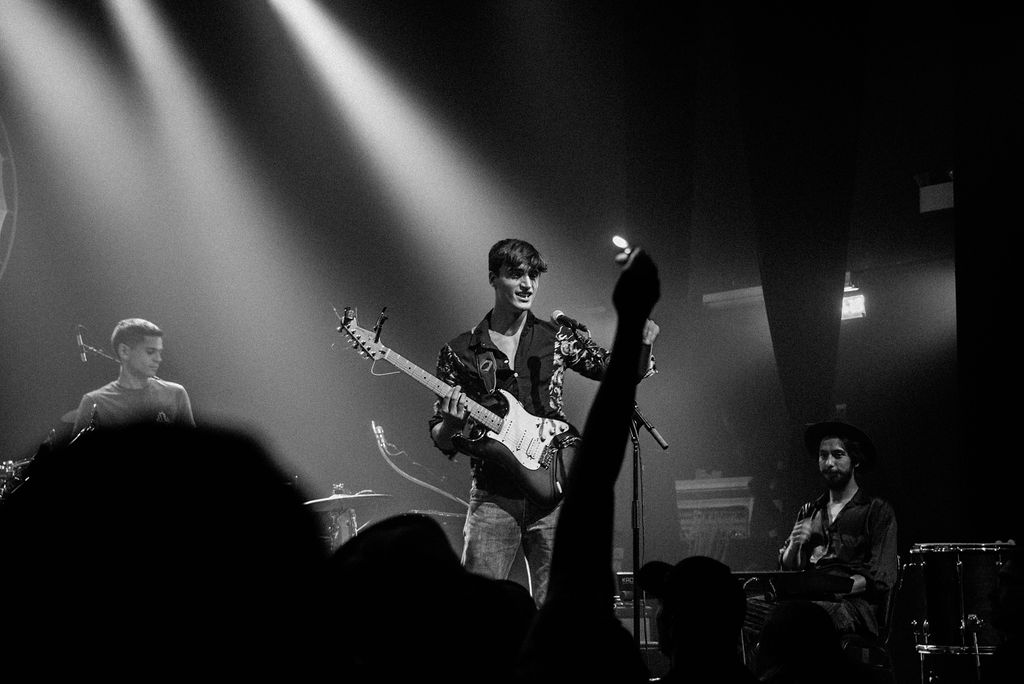 Eryn Temple may be on the verge of something big. The Montreal-based quartet—comprised of guitarist Tristan Huber, bassist Garrett Ellsworth-Spotton, keyboardist Jan Czebreszuk, a.k.a January the Month, and drummer Dany Moussalli—has spent the first two years of its existence in relative obscurity, refining their spacy, sentimental sound on a handful of self-released tracks. Now, in 2019, the group is set to make a noisy and permanent entrance into their city’s scene. Attention, Montreal, Eryn Temple is here to stay.

Banter: There isn’t any “Eryn Temple” in the band... What’s the meaning behind the group’s name?

Moussalli: I was actually booking a room one time, and one of the names already written down for that was “Eryn Tempest.”  I just thought to myself, damn, that would be a sick band name. We didn’t want to use the actual name though, so we all brainstromed for a bit and we came up with “Eryn Temple.”

Banter: You’ve described your musical product as psychedelic soul. Is the psychedelic component referring to production techniques, ie. phasing and instrumentation, or rather psychedelic culture more generally? Do psychedelics influence your creative process?

Huber: I guess you could say the psychedelic aspect of the music comes in when we start getting into the mixing techniques. Not much phasing, but, you know, obviously using a lot of delay and reverb—stuff like that. Even that stuff isn’t a huge part of our music. I’d say our style is defined more so by how we perform during live solos… Our songs are pretty tight, concise, and soulful, almost Motown sounding in some ways. It totally depends on what we’re playing. But the solos are definitely more intensely psychedelic in how we experiment.

Moussalli: You see it in the live shows especially.

Banter: Who are some of the musicians you feel that you’ve been influenced by in the past?

Banter: Oh, okay, so all over the place…

Huber: There are a lot, and we each have our own favourites. Personally, as a musician, I really look up to Led Zeppelin. In terms of vocals, I’d have to say Buckley or Winehouse. In terms of drummers, we’re talking Pink Floyd (Nick Mason), Ringo Starr, John Bonham. Our bassist is a huge fan of Bob Dylan.

Banter: Wow, okay, so we’re all over the map.

Banter: Okay, so last fall, you guys had a big performance at Club Soda, obviously a really prominent space in the city. As artists, is there a venue or event that you have in your sights? Somewhere that really establishes a band’s presence in Montreal’s scene?

Ellsworth-Spotton: Those are the big ones. Maybe POP Montreal?

Huber: I think our tone has matured

Jan: We can do Jazz stuff; we’re progressive.

Huber: And we can get funky.

Ellsworth-Spotton: Really funky. I think we could play in any of those shows.

Banter: Over the past couple of years, you guys have released a number of really groovy singles.... Daisy, Bad Habit, and most recently, Standing on the bridge of love. What’s the timeline for new music?

Huber: We’ve got four or five songs sitting on a laptop that just need to be mixed, and then they’ll be released at a show on January 17th. That’ll be at Cafe Campus.

Banter: That’ll be an album or an EP?

Banter Bonus question: If you guys had to play a set with one member completely shitfaced, who would you choose?

Jan: It would be Garrett on acid.

Huber: Definitely Garrett on acid. I’d like to think I could get away with it, but I can’t. Garrett’s the only one who could get something like that figured out.

Jan: He pretty much meditates while he’s performing.

Huber: Yeah and his skin starts to turn red and yellow and green.

Jan: He’s not even touching the bass, but bass lines are coming out.