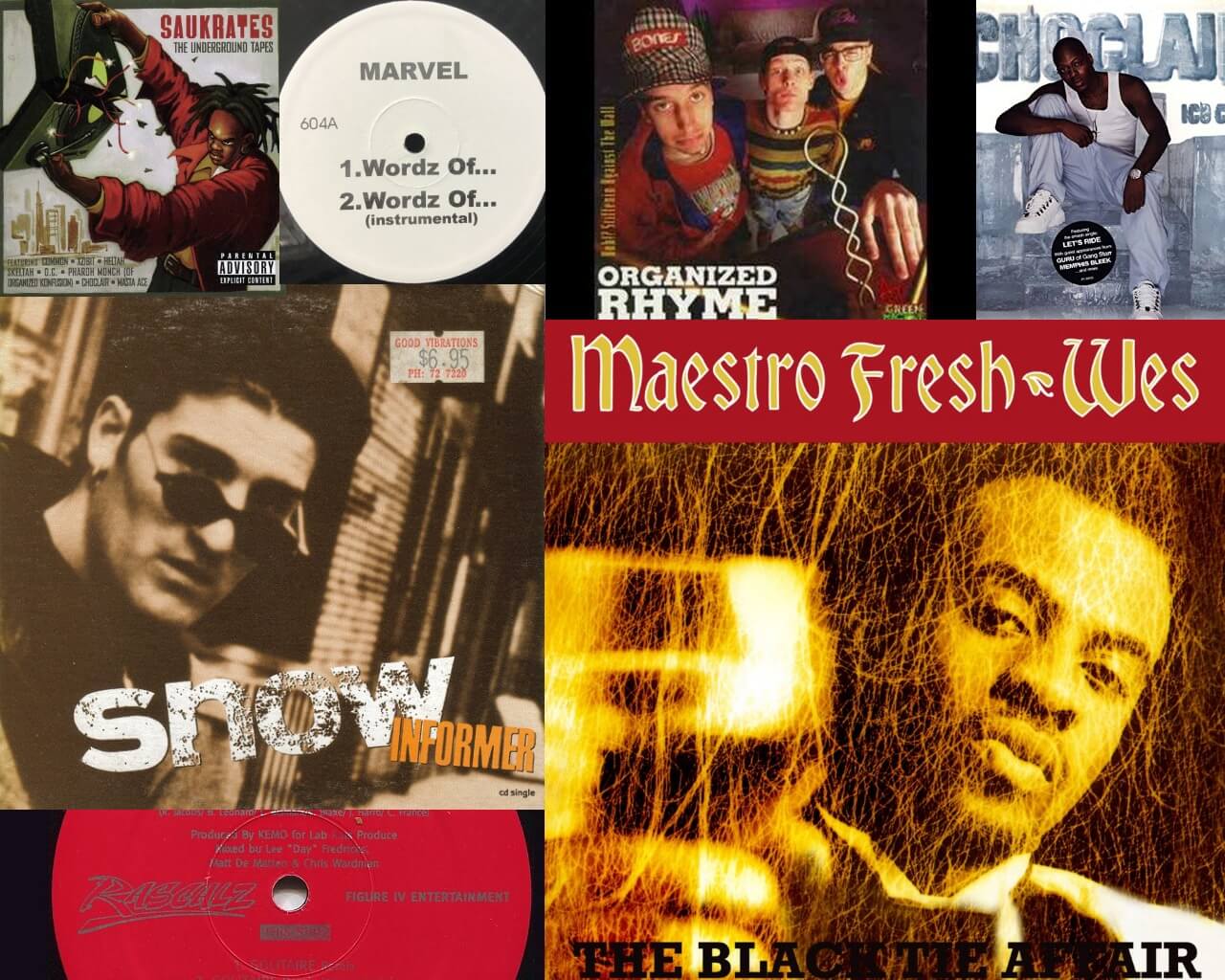 The 90s were the golden age of hip-hop for lyrical poets battling for success in America’s urban centres, namely Los Angeles, New York City, and to a lesser extent, Detroit and Atlanta. While the West Coast was feuding with the East Coast and deadly bars turned into deadly shootings, a few daring Canadians attempted to rap, and mostly failed. Here are the ten most honourable attempts, ranked by our editors using a super secret formula.

A bizarre white reggae artist, the aptly named Snow released this banger in 1992. Some critics might call it reggae, and definitely outside the rap category, but I think Snow’s ability to perfectly replicate a white dude doing a patois accent as one continuous vocal flow is too impressive to leave off this list.

One of the hardest beats to clear Toronto’s studios for all time, Saukrates went absolutely foolish on this track. “Body Language” is a handsome four minute and nine second ode to the trials and tribulations of picking up women in the six. The Underground Tapes was Saukrates’ debut album and featured guest performers like Common and Xzibit—very impressive for a Canadian rapper.

The pride of Scarborough, Choclair takes the wheel of a mid-90s Mercedes convertible for “Let’s Ride.” Accompanied by the familiar cadre of background dancers, we get a taste of that sweet Jamaican-inspired Toronto hip-hop. This is also a throwback to an era where it was at least somewhat credible for rappers to wear glasses. Can you imagine a bespectacled Drake?

“The kisses I deliver are like champagne / Spumante bambino put the ladies insane / When it comes to girls don't mess with Wes / By the time you clock digits I got the address,” raps Maestro Fresh-Wes, also known as Maestro, one of the best-known Canadian rappers of all time. “Conductin’ Thangs” comes from Maestro’s second studio album The Black Tie Affair, a socially aware record in many a sense. It also featured the song “Nothin’ at All,” which is one of the most poetic and moving homages to the black Canadian experience.

1996 saw the release of this well-wrought track from Marvel. Kardinal Offishal and Saukrates are listed as the producers, but the lyrics are all Marvel masterpieces. “Slingshot aiming at your knot,” the ‘wordz’ are reassuringly violent for a GTA man.

‘Naughty Dread’ earned a Juno nomination for Best Rap Recording in 1997, but it also earned him some serious respect in Toronto’s burgeoning hip-hop scene. He released the song as a single, but it appeared shortly thereafter on the all-star compilation album Rap Essentials Volume One.

From their debut album Passage Through Time, “Drama” is classic Da Grassroots big smooth max-relax sound. Elemental comes in for a verse, and the whole song is technically perfect for being stuck in traffic in the Don Valley.

Remember when Eminem said “it’s cool for Tom Green to hump a dead moose”? Yeah, apparently it was also cool for Tom Green to don a Senators cap and team up with MC Pin for this track. Insane jazz riffs and the only six black dudes in Ottawa round out the music video, while the lyrics themselves are predictably corny. Years later, the two old men reunited for a redux.

This 1999 cut absolutely slaps bone. I know ranking Saukrates at number two on this list might be somewhat controversial, but I love being forced to choose between ‘money or love.’ I could make a top ten list of Saukrates’ songs alone, but we had to make room for more rappers.

With this hit, Rascalz burst onto the Canadian hip-hop scene and permanently altered what was previously an underground culture. In a show of street defiance, Rascalz refused the 1998 Juno Award for Best Rap Recording—they were frustrated that the award was going to be presented during the non-televised portion of the event. Two other artists from this list featured on that track, Kardinal Offishal and Choclair whose combined force elevates the recording to another level.